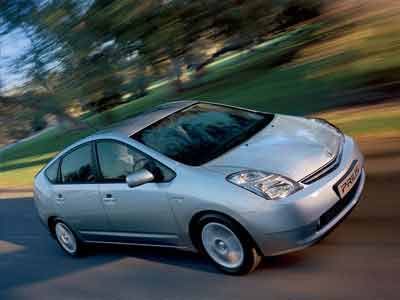 ­­In 1992, Volkswagen employed self-parking technology in its IRVW (Integrated Research Volkswagen) Futura concept car. The IRVW parked with full autonomy - the driver could get out of the car and watch as it parked itself. A PC-sized computer in the trunk controlled the system. Volkswagen estimated that this feature would've added about $3,000 to the price of a car, and it was never offered on a production model [ref].

In 2003, Toyota began offering a self-parking option, called Intelligent Parking Assist, on its Japanese Prius hybrid. Three years later, British drivers had the option of adding self-parking to the Prius for the equivalent of $700. So far, seventy percent of British Prius buyers have chosen this feature [ref]. Toyota plans to introduce the self-parking Prius to the United States in the near future, but no date has been set.

Although Toyota is currently the only company with a self-parking car on the market, others have self-parking systems in the works. In 2004, a group of students at Linköping University in Sweden collaborated with Volvo on a project called Evolve. The Evolve car can parallel park autonomously. The students fitted a Volvo S60 with sensors and a computer in its trunk, which controls the steering wheel as well as the gas and brake pedals. You can see a video of this car in action here. Seimens VDO is working on a standalone driver assistance system called Park Mate, which would help drivers find a space as well as park in it.

A car that can take control of the wheel to park itself is one thing, but a self-driving car is another. It seems like a futurist's dream: millions of fuel-efficient cars driving smoothly under computer control, safely avoiding collisions and maintaining safe speeds, while the "drivers" sit back and watch TV or take a nap. How far are we from a "Jetsons"-like autotopia? Probably pretty far.

Many people enjoy driving, so it might be difficult for them to relinquish control of their vehicles to a computer, even if it would be safer. Product liability laws also have to be taken into account. However, the technology isn't far away. General Motors plans to offer a self-driving 2008 Opel Vectra to German drivers. The car will drive by itself at 60 mph, using a system of cameras, lasers and computers to track lanes, road signs, curves, obstacles and other cars. [ref].

The 2008 Opel Vectra at the 2006 Opel Zentrum in Berlin, Germany.
Public domain image

Some cars already have a semi-automated cruise control system, known as adaptive cruise control. This system allows the driver to set a speed, just like regular cruise control. However, this system uses lasers to detect the distance to any vehicles on the road ahead, and automatically slows the car down if it gets too close.

Another upcoming development would use wireless technology to connect cars to each other. If one car detected slippery conditions on a curve, cars behind it would receive the information and slow down. Traction control systems would also kick into action. In addition, this system could detect traffic conditions by tracking the speeds of other cars and then suggest alternate routes.

While self-parking cars might seem like a frivolous luxury at the moment, they're actually the next step in the evolution of automotive technology.For lots more information about self-parking cars, car systems and related topics, check out the links below.