How do automakers test long-term durability? 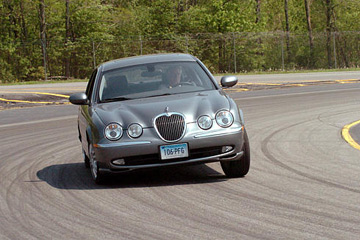 Testing the long-term durability of a car is fairly straightforward. Simply compress its useful life, about a decade in most cases, into a shorter period, say a few months to a year. While the concept may be simple it's never easy, but it can be interesting.

Testing could mean driving the car over a test track 24 hours a day, seven days a week, for more than a month. It could mean putting the car on a static dynamometer and running it at 120 miles per hour (193.1 kilometers per hour) for several months. Durability testing of a car door could mean opening it and closing it thousands of times a day, for a week or even a month.

Indeed, for every real life challenge a car could face on the mean roads of America there is a test to simulate it, compress time, and create a virtual reality that's a reflection of a real-time equivalent. For those involved in the industry, from Detroit's Big Three auto manufacturers to smaller component suppliers, they'll take whatever measures necessary to ensure their product can stand the final test -- the test of time.

However, time isn't always the essence when it comes to long-term durability.

"I tell people all the time that we sell information, not mileage," said Linwood Farmer, Vice President of California-based Automotive Testing & Development Services Inc. (ATDS). To gather that information, ATDS -- an independent service that works with most major car manufacturers and suppliers -- runs a wide variety and range of tests on cars and components making Farmer's job somewhat offbeat. "We have cars running [24-hour driving tests] in Las Vegas, Phoenix, Michigan and California," he said. "Later this year we're doing testing in Fairbanks, Alaska. We do whatever tests need to be done to get the information the client needs."

Other tests include using the four-post shakers, seen in Mercedes-Benz ads, where each wheel of a car is on top of a hydraulic pillar. The pillars are linked to a computer that can use the pillars to simulate the jouncing and crashing the car would experience on a real-world road. ATDS has placed cars in the Arizona desert surrounded by mirrors to test whether paint or fabrics would fade and could stand up to high temperatures. The company also tests the smaller things like lock switches, radio knobs, rear view mirrors, essentially anything a manufacturer wants them to test.

"(The manufacturers) want to make the cars better," Farmer said, adding ATDS will work on new cars and existing vehicles. "This testing allows them to come up with what the Japanese call 'counter measures.' The company comes up with a fix for the problem." Some manufacturers have in-house testing facilities, like Mercedes-Benz, for specific car systems. However, most companies, including the U.S. government, seek out independent labs for testing as they are often less expensive and as accurate as in-house labs. Another example of an independent lab is the Nevada Automotive Test Center, which boasts more than 3,000 miles (4,828 kilometers) of test tracks, simulated environments and a firing range for their government contracts.

Farmer, an engineer by training, added another component the test mix when finding a true fix to an issue. When testing for long-term durability his company strives for both precision and accuracy. He defined precision as how well a test was developed and executed. Accuracy, on the other hand, was how well the test reflected the real world. "A test could be precise, but it may not be accurate. That's why we test in the real world as much as possible," he said, adding the better the information the better the solution, even if it's running a car through the rigors of an Alaskan winter. "We'll test anything [our clients] want us to test. This is a highly-interesting business."