How long are you responsible for a car after you sell it? 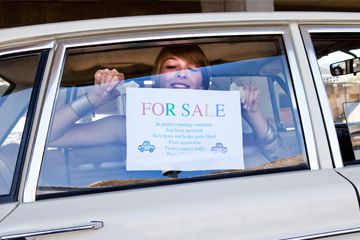 This might sound funny to anyone who’s ever bought or sold a used car, but honesty really is the best policy.
Dimitri Otis/Getty Images

In most states, used car sales are understood to be "as is." This means the buyer understands that if something goes wrong after the car is driven away, it's entirely his or her responsibility. That means that, as a seller, you're not responsible for the car after it's sold. However, would-be sellers should understand a couple of important points.

First: If your sales contract includes any language describing a warranty or a guarantee on the car, you might be on the hook for anything that goes wrong. As a private seller, you probably aren't in a position to offer any such thing (you're not going to repair the car yourself, right?), so such a guarantee would be an odd benefit to offer. As long as the contract doesn't say you'll take the car back if something goes wrong (and why would you do that?), you're good. Anything that was said during the sale won't put the seller on the hook either. Any statements about a guarantee have to be in writing to carry legal weight [source: Johnson].

Second: Don't deliberately misrepresent the condition of the car when you sell it, because that's fraud.

Fraud is serious. If it's discovered that you've committed fraud, you'll probably be forced to take the car back, and you also might face other legal consequences. Here's an example: Say a car was flooded or in a serious accident. It should have been salvaged, but a process called "title washing" kept the car from being branded as a wreck, and so the damage was never disclosed during the sale.

Not all cases of fraud are that severe, though. Any false statement about the car (a statement of fact, not an opinion) — which the buyer can prove is incorrect — can open up a fraud case. In other words, fraud is a deliberate and illegal action on the part of a shady seller, rather than a scenario in which the buyer and seller simply disagree about the way the car's condition has been described. (If you say the car runs well, and the buyer drives off and finds it's not really running all that well, that's not fraud.)

This might sound funny to anyone who's ever bought or sold a used car, but honesty really is the best policy. As long as you don't misrepresent the car you're selling, it'll be out of your life for good once your buyer has driven it away.