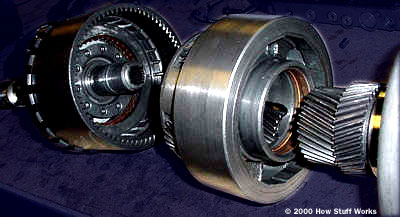 From left to right: the ring gear, planet carrier, and two sun gears

­When you take apart and look inside an automatic transmission, you find a huge assortment of parts in a fairly small space. Among other things, you see:

Each of these three components can be the input, the output or can be held stationary. Choosing which piece plays which role determines the gear ratio for the gearset. Let's take a look at a single planetary gearset.