The Daytona 500: The Great American Race 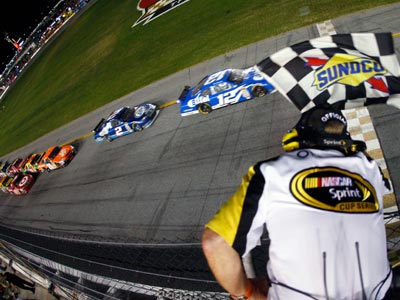 ­In each form of major motorsports, one race defines careers and turns drivers into legends. Formula 1 has the Grand Prix of Monaco. Sports car drivers pay homage to the 24 Hours of LeMans and the recently reunified Indy Racing League showcases the Indianapolis 500 as its marquee event. In American stock car racing, the race that creates legends is the Daytona 500.

The Daytona 500 is not only considered the Holy Grail in stock car racing, but it's also considered to be the most popular race in America. Consequently, the Daytona 500, or simply The 500 as it is known by NASCAR fans, is sometimes referred to as the Great American Race. The Daytona 500 is unique in many ways. For one, the race is in the beginning of the NASCAR season. That may sound odd and begs the question, "Why would NASCAR hold its largest and most prestigious race as its first event?" Well, the truth is that nobody really knows. What is certain though is the amount of fanfare and money the Daytona 500 draws.

The share for 2008's winner -- in this case, driver Ryan Newman -- was more than $1.5 million. In the same race, driver Kenny Wallace raked in an impressive $256,735 for his last place finish. The race routinely draws celebrities from across the nation and even U.S. presidents. Considering the enormity of the race, it's no wonder the Daytona 500 is the one race every NASCAR driver aspires to win.

Over time, racing technology has advanced resulting in increased speeds. In 1987, driver Bill Elliott shattered the track qualifying record with a speed of 210.364 mph (338.548 km/h), prompting NASCAR to implement the earlier-mentioned restrictor plates. Since then, the speeds have come down considerably.

The other impact of restrictor plate racing is drafting. Drafting is the term for two or more cars running closely in a line. The draft, as it is commonly called, is when the lead car punches a hole in the air and the trailing cars share each other's aerodynamics. In essence, four cars drafting together are similar to one long car dispersing the air amongst them. Drafting works well when cars are driven in packs, so a car driven outside of the pack at Daytona and Talladega is always much slower. As a result of the efficiency of drafting, qualifying usually doesn't matter as much at a restrictor plate track -- during a race, a skilled driver with a well-tuned car can drive from the rear of the field to the front of the pack in a matter of just a few laps.

The Daytona 500 is one race sponsors and drivers can't afford to miss. Maybe it's appropriate the grandest race on the NASCAR schedule has such a unique qualifying format.

Preparation starts months before cars even hit the speedway for qualifying. NASCAR teams spend countless hours building, tuning and testing the cars they bring to Daytona. When the teams feel confident that they have the fastest car possible, they head to Florida for two weeks of intense competition.

Let's roll into the next section, as we hit the track for Speedweeks.