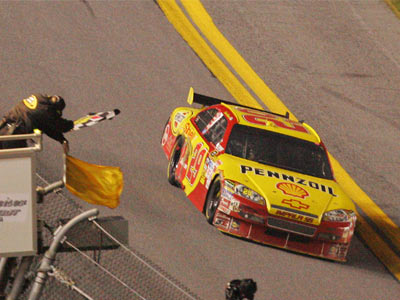 Speedweeks is the term given to the two weeks that encompass the Daytona 500. For the NASCAR Sprint Cup Series, Speedweeks begins with single-car practice sessions and eventually leads up to drafting practice and then race practice. Along the way, NASCAR holds a special event called the Budweiser Shootout. The Shootout is a 75-lap, non-points race held on the Saturday prior to the Daytona 500. The drivers race for 25 laps, take a 10-minute intermission and then head back out onto the track for the final 50 laps.

The Sunday before the race is qualifying day and every car on the entry list -- at least those cars that have passed NASCAR inspection -- gets a shot at the pole position. Like every other qualifying session, drivers get an entry, or up-to-speed, lap and two timed qualifying laps. Teams often do several unique tricks to the cars to gain every ounce of speed they can. Small disc-brake rotors are installed and the brake pads are pried away from the discs to eliminate all rolling resistance. Team will often use thin-weight oil in order to create less friction in the engine. Drivers also do whatever they can, as the typical qualifying session sees cars travel around the top of the track during the first lap then drop to the bottom of the track on the second lap. Because the superspeedways are so big and banked so high, drivers can hold the throttle wide open during their qualifying laps. Driving in the high lane gives the cars more initial speed, but the low line is the shortest distance around. If you were to wrap a piece of rope around the lower edge of the track and another piece of rope around the top edge of the track, and then measure the two pieces of rope side by side, you would find that the rope used to measure the outer edge would be much longer. Because the centrifugal force is greater the lower on the track the cars run, the speeds are often faster -- that is, if the car handles well.

Qualifying speeds are measured in this way:

In this formula, distance is the track length and time is the vehicle's recorded lap time. We know that one hour equals 3,600 seconds, and the track length at Daytona International Speedway is 2.5 miles (4.02 kilometers). So, if a driver turns in a lap time of 48.62 seconds, we have all of the data that we need to calculate the average speed for that lap. Here's how it's done:

Or if you choose to calculate the average lap speed using metric measurements:

As you're about to find out, laying down a fast qualifying lap does little to secure a spot on the starting grid. It doesn't matter where the driver initially qualifies; what matters is where they finish in the qualifying race. In a cruel twist, the fastest cars on qualifying day don't always make the Daytona 500. Are you confused yet? Not to worry -- keep reading to understand how NASCAR sets the field for each Daytona 500.