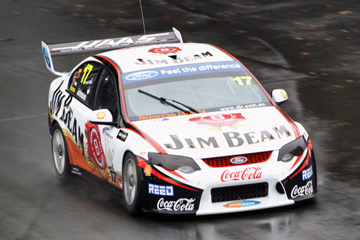 Steven Johnson drives the #17 Jim Beam Racing Ford during qualifying for race five of the Hamilton 400, which is round four of the V8 Supercar Championship at Hamilton City Street Circuit on April 16, 2011 in Hamilton, New Zealand.
Robert Cianflone/Getty Images

In July of 2010, developers announced plans to build a world-class 3.4-mile-long racetrack just outside Austin, Texas. The name of the track, which is scheduled to open in 2012, is the Circuit of the Americas, and its developers stated intention is to make it "the United States' new home for the World Championships" of the racing world. They've already signed up Formula One racing, making it America's home for the Grand Prix. And they've made a five-year deal with V8 Supercars to run the V8 Supercar championship races in the U.S. from 2013 until at least 2017. The Circuit of the Americas is planned as a state-of-the-art facility that will not only attract racing fans from all over the world but will also be home for conventions, conferences, live entertainment and a museum.

The V8 Supercars events will be carried live on Speed TV in the U.S., which carries the Australian events on time delay.

Although the V8 Supercar Championship series has already taken the Australian racing world by storm, its introduction in the United States should greatly increase its following and turn it into an event to rival NASCAR and Formula One. Ironically, the idea of extending V8 Supercar racing to North America was initially rejected by the organizers of the Championship Series, but its increasing popularity with major racing drivers, many of them champions of the Indianapolis 500 and Formula One races, has apparently persuaded them that coming to America is a good idea. General Motors is also strongly supportive of V8 Supercars new American presence. Ford will no doubt follow suit.

If racing fans don't already find their sporting cup running over with Formula One, NASCAR, the Indianapolis 500 and other U.S.-based racing events, V8 Supercars should be just what they need to fill those hours that would otherwise be spent on non-racing activities. And the racing world in general can only benefit from the increasing popularity of this new series of championship events.