A History of V8 Supercars 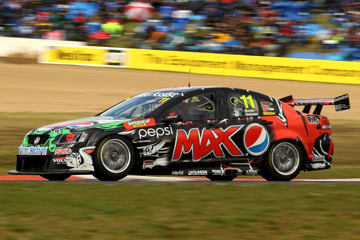 Greg Murphy drives the #11 Pepsi Max Crew Holden during the Bathurst 1000, which is round 10 of the V8 Supercars Championship Series at Mount Panorama on Oct. 9, 2011 in Bathurst, Australia.
Matt Blyth/Getty Images

The history of V8 Supercars goes back to 1960, when it was known as the Australian Touring Car Championship. Until 1968, it was a single race, not a series. The first was held on the Gnoo Blas circuit in Orange, New South Wales, and the winning driver was David McKay, who went on to become a racing journalist for the Australian Daily Telegraph. The car he drove in the winning race was a Jaguar Mark I. Many different types of cars have won the Australian Touring Car Championship over the years, but in 1995 the rules were changed to specify that only two makes of cars were allowed: the Holden Commodore, a General Motors car made exclusively in Australia, and the Ford Falcon. (Although the Falcon is made in the United States too, the version used in V8 Supercars is the Australian model.)

Why the Commodore and the Falcon? Part of the reason may be that these muscular 8-cylinder vehicles are the two most popular passenger cars in Australia. They're particularly popular as police cars and taxicabs, because of their durability and powerful engines. And, on the Touring Car circuit, they've gained quite a reputation as race cars.

In 1997, the Australian Vee Eight Supercar Company (AVESCO) was created to run the series and find ways to expand its popularity. One of these, in 1999, was to change the name of the series to V8 Supercars. Interest in the sport also began to spread and races began to be held in other countries, particularly in the Middle East. Future hosts of V8 Supercars are expected to be South Africa, India, Korea, Singapore and Hong Kong and the U.S.

There are several key events in the V8 Supercar Championship series. These include the Bathurst 1000, held every October on the Mount Panorama Circuit in Bathurst, New South Wales; the Clipsal 500 held on the Adelaide Street Circuit in Adelaide in March; the Phillip Island 500K held at the Phillip Island Grand Prix Circuit in Victoria in September; and the Sydney Telstra 500 at Sydney's Olympic Park, which is the grand finale event of the season, held in December. The Sydney Telstra 500 is the newest of the Australian V8 Supercar events.

But what about the Supercars themselves? We know that they have to be either Holden Commodore or Ford Falcon models, but what else does it take for a car to qualify as a V8 Supercar? There are some pretty strict rules. We'll look at them on the next page.