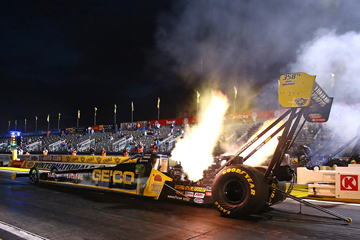 Experts estimate Top Fuel cars can reach over 150 decibels, a level that can cause physical damage to the eardrum.
(Photo by Mark J. Rebilas/Geiger Media Global)

Motorsports fans are advised to wear some kind of ear protection when they're watching Top Fuel racing live. Easily obtainable foam earplugs, like the kind that you'd wear to catch some sleep on a long plane trip, can cut the sound by about 20 decibels [source: McGee]. That's not a lot, as you'll see, but it's better than nothing. Hearing damage is usually permanent, and once it starts, it's irreversible. And Top Fuel dragsters are the worst noise offenders out there.

Top Fuel dragsters are the NHRA's loudest cars, in part because of the way the engine is mounted. If it was under a hood like a normal car, there'd be at least some insulation to muffle the sound; however, it's completely exposed, and all the engine's workings are right out there -- oh, and there are no mufflers either. The NHRA once allowed a team of seismologists to stand at the starting line to measure the race the way they would measure an earthquake -- the two cars rated a 2.3 on the Richter scale [source: McGee]. That's equivalent to a minor quake, the kind that might go overlooked by some people in the vicinity, but others will definitely feel it. So, the Top Fuel cars' rankings on the earthquake scale are somewhat low, but the fact remains that these are cars that were once officially and scientifically compared to earthquakes. And that's about the most official research that's ever been done. According to ESPN, even though the NHRA will let seismologists take meter readings, they've never recorded official noise levels, and it's unlikely they ever will. It's all part of the mystique surrounding the sport, they explain. That, and once there are official decibel levels on-record, there's a lot more grounds for complaint and protest. In 2010, an ESPN reporter scrambled around to find a sound meter capable of testing a Top Fuel drag run -- the highest he could record was 140 decibels, with the meter blinking to indicate its capacity was topped out. Experts estimate Top Fuel cars can reach over 150 decibels, a level that can cause physical damage to the eardrum. For comparison's sake, a typical rock-concert is about 104 to 120 decibels.

There's no sign of Top Fuel popularity slowing down anytime soon. In fact, over just the last few years, the cars themselves have become even more powerful. And the faster a Top Fuel car goes, the louder it gets, which means that as technology continues to improve, more and more drivers are encountering hearing loss [source: McGee]. Fans will have to deal with more potential hearing damage, too. It's just one of the many well-publicized risks of racing, but for the drivers and the fans, the smell of burning nitromethane is well worth it.

When I started to research this article, I had to go to the beginning. I'd heard of nitromethane, of course (thanks mostly to repeated viewings of "The Fast and the Furious" films) but I didn't know it went by other names. The National Hot Rod Association site is a little outdated, but a nice guy in the marketing office was happy to provide me with some updated statistics. Attaining such a speed in a car is a little mind-blowing, to tell the truth, because of air resistance and traction and the laws of physics. I've gone about half that fast before, but I was falling through the sky with an as-yet-undeployed parachute on my back.