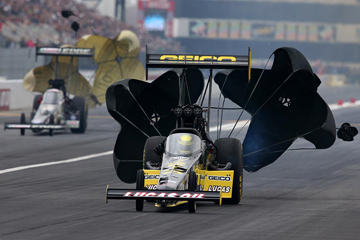 Even though whoever gets to the finish line first is crowned the victor of an NHRA drag race, that doesn't mean the winning car is necessarily the fastest. It also doesn't mean that car is the quickest. If a car is the first off the line, that's a huge advantage in a race that only covers a short distance. Even if the other car has a faster top-speed, it might not be able to cover the lost ground to take the win. So, even though the races are brief, there's always a lot of action.

Top Fuel cars take off from the starting line and reach a speed of 100 miles per hour (160.9 kilometers per hour) in less than a second. This makes them the fastest accelerating machines in the world. (Not just the fastest cars to accelerate, but the fastest anything to accelerate.) The engine's power reaches the wheels in a lickety-split fraction of a second -- 15/100, to be precise. At launch, Top Fuel drivers endure G-forces similar to astronauts during a space shuttle launch. And almost just as quickly, they need to stop. Since these cars would wear through brakes pretty quickly at more than 300 miles per hour (482.8 kilometers per hour), Top Fuel dragsters are equipped with a special type of primary braking system. After crossing the finish line, the driver hits a switch that deploys two parachutes behind the car, and the intense wind resistance slows the car with little risk of additional mechanical failure.

Funny Cars use the same kind of engines as Top Fuel cars, but there are plenty of differences. The first Funny Cars were 1960s HEMI-powered Dodge models, and they didn't become part of the NHRA until around 1969. The rear wheel placement has been slightly adjusted, and the rear tires are a lot larger now, too. The different wheelbase of Funny Cars, as compared to Top Fuel cars, may account for some of the differences in speed and acceleration, since the huge amount of power going to the rear wheels can cause a lot of extra movement as the cars zip down the strip. In Top Fuel cars, the engine is situated behind the driver, but Funny Cars put the engine up front. Funny Cars use the wheelbase of a production car from the model year 2000 or later, and then a fiberglass replica of the body is constructed to reduce weight. The rules for using production cars offer a lot of leeway. Racers can use sports cars, coupes, or sedans from any domestic or import auto manufacturer, as long as the car was originally mass produced. In other words, race teams can't modify concept cars or show cars or hand-built boutique cars. To be eligible under the NHRA's rules, the car must have been built on a factory assembly line. At one point, about 20 years or so ago, there was talk of changing the Funny Cars' official name to "Fuel Coupe" and the similar names may have strengthened the connection between Top Fuel and Funny Cars -- at least in fans' minds [source: Klinger].

Top Fuel drag cars and Funny Cars have similar performance specs, thanks to the related mechanical components. Over the 1,000-foot (304.8-meter) straightaway, these dragsters reach speeds above 300 miles per hour (482.8 kilometers per hour) and complete the distance in three to four seconds, burning about 1.2 gallons (4.54 liters) of nitromethane blend per second, and about 17 gallons (64.35 liters) per race [source: Mazlumian]. Another way to get a sense of these cars' capabilities is to look at the records. At the start of the 2014 season, the record for fastest Top Fuel car in the series was 332.18 miles per hour (534.6 kilometers per hour), held by Spencer Massey, and for the Funny Car series, the top-speed recorded was Matt Hagan's 320.66 miles per hour (516.1 kilometers per hour). Antron Brown's car completed a Top Fuel run in just 3.701 seconds, and Jack Beckman's Funny Car record is 3.986 seconds.