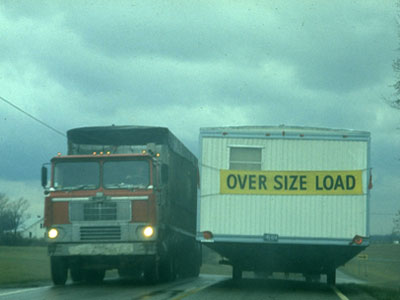 An oversize load can make for tight spaces on the highway.
Ralph Crane/Stringer/Getty Images

If you've ever spent much time driving on U.S. expressways, then you're familiar with this sight: A large flatbed tractor-trailer is in front of you with what looks to be a full-sized house at rest on the bed. There are signs everywhere declaring it an "oversize load," and a small car with a tiny, yellow warning light on top is following it to make sure nobody gets too close.

What is an oversize load? It's what you call it when a truck needs to haul something that's deemed too large for the road it's traveling on. This can be anything from a mobile home to a large piece of construction equipment or materials. The common denominator for oversized loads is that they can't be made smaller for transport.

What constitutes an oversize load varies from state to state and within those states, from city to city, if the truck travels on smaller, local roadways. This is important because wherever you travel, you'll need a permit. Any time you cross a state line, you'll need to have your permit in hand. If you get off the major highway to deliver your load, you'll need a city permit, even if you have the state permit. State highways are governed by a different agency than local roads. It's the same reason you'll see highway patrol cars writing tickets on expressways and local law enforcement setting up shop in town.

Tighten those tow straps and truck on over to the next page to learn a little more about oversize loads.

How to Tow An Oversize Load 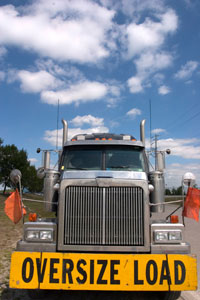 If you see this in your rearview mirror and you aren't a pilot car, maybe you should move out of the way.
tillsonburg | ©istock photos

Let's say your parent's have left you a lovely, double-wide trailer home in their wills. As much as you love the abode, with its wood paneled walls and berber carpeting, you don't want to live on the narrow plot where it sits in the mobile home community. The dumpster is right beside it, and the neighbors lack something in the personality department. You get the big idea to move it out to a nice, quiet spot in the desert and live rent-free for the rest of your life. It's easy enough to simply find a company to move it for you. But you're a stickler for details and want to know some specifics about how the move will work.

Here's how towing an oversize load works: The first thing your moving company will do is get the specs of your trailer, where it's coming from and where it's going. The moving company will need to know the exact dimensions -- height, width, length and weight. This information will help the company determine the following:

The number of pilot cars you'll need, if you need one at all, will contribute to your costs. Some companies require the use of their own fleet of pilot cars and drivers, while some allow you to bring in a third party company. Ask if the moving company will match the price of another company. This can save you time and effort. Just as each state has its own definition of what constitutes an oversize load, each one has its own laws regarding the use of pilot cars. For example, here in the state of Georgia, home to HowStuffWorks, a permit is needed on state highways for a load larger than any of the following:

This is only one example of how to tow an oversize load, but it's good to know what to expect when dealing with the hauling company. Take some time to research the laws in your state so you can be well informed of your needs and choices.­ 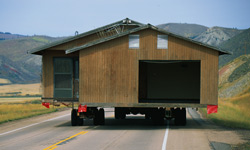 If you've got oversize load towing on the brain, we've got some oversize load towing tips for you to keep in mind: First of all, aside from the size and pilot-car regulations, all states and cities have different laws for when you're allowed to travel with your oversize load. Most won't let you drive during the morning or evening rush hours, or at night. Some states won't allow travel on Sundays, so keep this in mind when making your moving arrangements. Signage also varies from state-to-state, requiring specific sizes, colors and quantities of signs and flags, depending on your load.

If you plan to have something moved, get the local and state rules and regulations yourself so you know what you're getting into. That way there'll be no surprises when the estimate comes in for what it will cost and how long it will take. You'll be paying for the services of the pilot car company, which include the driver, the car and the fuel. You'll also be paying for the truck, the truck driver and the fuel. The cost of your move will vary according the cost of gas, so if you're flexible, you can save a few bucks by waiting for lower fuel prices.

If you're really into oversize load towing, and you have a good driving record, you might think about starting your own pilot car business. One thing you need to keep in mind -- it means being away from home quite a bit. So if that's not appealing, then it probably isn't the job for you. Since you'll be supplying your own vehicle, there's also the wear and tear on your car or truck to consider. It's also fairly seasonal, with more oversized loads being shipped during warmer months. Each state has its own pilot car guidelines so look into that first if you're considering a career as a pilot driver.

You'll probably need to invest about $1,000 in signage and lights for you car, and then it's up to you to pull in the business. You are your own company, so you will have to do your own marketing and advertising, which will cost a little money. It may take several months to book regular jobs, so plan ahead financially to stay afloat. You'll get paid with invoices, which usually means a waiting period between the time you drive and when the check comes -- another financial consideration. You'll be road weary and away from family and friends quite a bit, but you're your own boss and master of your own destiny, which appeals to the mavericks of the open road -- the pilot car driver.

Now that you know how to tow an oversize load, roll on over to the next page for links to articles on other towing challenges.