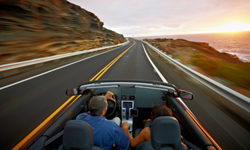 The roads where I live handle a lot of agricultural traffic. Following a trailer off the pig farm is great the first few times ("Aww! Piggies!"), but pig trucks aren't known for their speed, and when you think about where those pigs are going, it's hard to feel right about squealing over how cute they are ("Aww! Pre-bacon!"). Passing the pig trucks, however, is tricky for me. Usually by the time my car realizes that I'd like it to increase its speed sometime this week, a chicken truck is barreling toward me in the passing lane. And since I don't want to play chicken with a chicken truck, I tuck back in behind the pig truck. Driving along in a cloud of Eau de Swine, I think about how I really need to improve my car's engine response.

Whether you're stuck behind a pig truck or just trying to jump off the line at a red light, improved engine response is a good thing. Before we get into how to get it, here's a tip: What most people call engine response, car geeks call throttle response. Why? Because engine response is how quickly the engine modulates its output when the driver increases or decreases pressure on the throttle. Engine responsiveness is how most of us think of it, but if you're talking cars with a snotty guy in a BMW jacket, calling it throttle response will save you from getting a lot of condensation thrown your way. Plus, it's more specific. Engines are complex pieces of machinery, and what we're talking about when we say engine response centers around systems directly related to the throttle. And, since you request and feel engine response through the accelerator (or throttle, if that guy in the BMW jacket is still hanging around), calling it throttle response keeps you focused on what you're asking your car to do, and how well it does it.

One of the easiest ways to improve engine and throttle response is by making sure your fuel filter is clean. When you stomp on the gas pedal, it sends a signal for more fuel to go into the engine. To get there, it has to pass through the fuel filter (which filters out impurities and sediment, keeping your engine clean). Asking and engine with a clogged or dirty fuel filter to respond to throttle input is like asking someone to sprint with a muddy towel over their nose and mouth. They can probably do it, but it won't be pretty.

In addition to poor engine response, symptoms of a clogged fuel filter include rough idling, poor fuel economy, trouble starting, sputtering and flat-out stopping. Cleaning a fuel filter is pretty easy, though. Most cars have their filters in the fuel lines between the fuel pump and the injectors. Because they're made to be cleaned and replaced (if they're really dirty), it's fairly easy to pull a fuel filter from your car's engine. You can clean it by blowing some compressed air on it until air flows through it freely. But if you can't get air to flow through it, it's time for a replacement. Put your dirty fuel filter back in for one last trip to the auto parts store. Playing taps as you throw it away is optional. 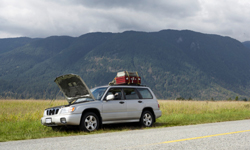 If your car runs with decreased engine response due to a faulty fuel pump, it's probably just a matter of time before that fuel pump strands you somewhere you'd rather not be.
Noel Hendrickson/Digital Vision/Getty Images

If you know your fuel filter is squeaky clean and your car is still about as easy to move as a narcoleptic elephant, you might want to check your fuel pump. When you hit the gas, your fuel pump is supposed to pump fuel (shocking, we know) to the engine. If it isn't working, your engine isn't getting the fuel it needs and won't respond like it should.

Most cars today use an electric fuel pump (but if your car has a carbureted engine, it will likely have a mechanical fuel pump). There are two types of electric fuel pumps: suction type and pusher-type. True to their name, sucker-type fuel pumps suck fuel from the tank by creating a vacuum. Pusher-type pumps are placed in a car's gas tank and push gas to the engine. They should really try to make these pump names less complex.

Unlike a fuel filter, fuel pump problems are harder to fix. You're probably going to need to take your car to a mechanic, and oftentimes the only solution to a bad fuel pump is to replace it. But, considering that your fuel pump is the mechanism that delivers the food to your engine's waiting mouth, replacement is worth it. Even if your car runs with decreased engine response due to a faulty fuel pump, it's probably just a matter of time before that fuel pump fully shuffles off its mortal coil, stranding you somewhere you'd rather not be.

If you don't get by now that the best way to improve engine response is to make sure that the engine is getting plenty of fuel, then reading the rest of this probably won't help you. But, if you're cool with the whole "engine needs fuel" concept, there's someplace else you should look for problems with your engine response: your fuel lines.

The fuel pump sends fuel from the gas tank to the engine, but that fuel has to get there somehow. That's where the fuel lines come in. A leak or a kink in your fuel lines, even a tiny one, can rob your engine of performance. Because the fuel lines won't be able to maintain the pressure needed to transport the fuel through the lines, a car with a leaky fuel line won't respond quickly to driver inputs. The fuel lines are like train tracks: If there's a problem with the tracks, the train won't be coming through -- at least not a full speed.

If you have a big leak in your fuel lines, you'll probably know it because there'll be a puddle of fuel under your car when it's parked. A smaller leak or a kink in a line will be harder to detect, however. You visually inspect the lines or check fuel pressure using a...wait for it...fuel pressure gauge. That sort of test can be a bit much for people who aren't dedicated mechanics, and messing with fuel lines raises some safety issues. If you're not completely sure you can safely do the fuel pressure test and fix any problems you find, you're next step should be pulling out the yellow pages and finding a good mechanic. 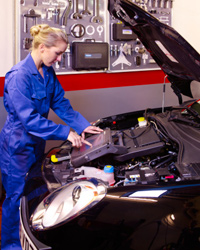 Diagnosing a sensor problem is usually fairly easy -- as long as you have your own diagnostic code reader.
Peter Dazeley/Riser/Getty Images

Sometimes what's robbing your engine response isn't mechanical or fuel related. It could be a sensor problem. Most late-model cars regulate engine performance through a central computer. That computer uses sensors to look at driver inputs and engine conditions. It then directs various components based on the current conditions and what the driver is asking the car to do. If the sensors are bad, your car's computer is flying blind. It's kind of like blindfolding someone and then plopping them down in the middle of a marching band performance. You can help by shouting instructions, but because they won't be aware of all the conditions, they'll run amuck pretty quickly (Author's note: I'd pay to see something like this). A computer with bad sensors only has the driver's inputs to go on.

Two main sensors are usually the culprits for bad engine responsiveness: the mass air flow sensor and the engine speed sensor. The mass air flow sensor (MAF) measures and reports on the airflow into the engine so the computer can request the appropriate amount of fuel. If the MAF is bad, the engine won't be getting the correct amount of fuel, which will throw off the engine's combustion (we're talking about internal combustion engines, after all) and decrease engine response.

Though it sounds like it measures how fast you're going, the engine speed sensor actually measures how fast the engine's crankshaft is spinning. Just like you need a certain amount of air and calories to perform a given physical task, your car's engine needs a specific amount of air and fuel to operate at various engine speeds. If the computer doesn't know how fast the engine is working, it won't know how much air or fuel to send to it and the engine will lose responsiveness.

Diagnosing a sensor problem is usually fairly easy. A mechanic simply hooks up a diagnostic code reader to the car and is told which sensor needs fixing. You can get a code reader for home use too, though replacing a sensor at home can be a little tricky. Still, having your own code reader can make for some fun dinner party conversation, provided you get people's permission to diagnose their cars and don't just approach people and smirk that you have a MAF problem for them to solve.

You know how your car has that central computer tracking everything and keeping your engine running optimally? Do you ever feel like that computer might just be a little evil?

We tend to think people trump computers. Except when it comes to spell check. And doing any sort of math. But when it comes to cars, we really tend to think that the driver knows best. In modern cars, however, that's not always true. The computer that runs your car may be intentionally dampening engine response. That makes autocorrect seem almost benign, doesn't it?

If you want better engine response, having a nannying C3PO on-board is a problem with only one solution: Find an R2 unit that will let you have some fun. Aftermarket plug-and-play units are available for many cars and can improve throttle response. These are little computers that plug into your car, intercept the signal from the throttle and send a more aggressive one to the computer. You can also customize the computers on many cars, setting the engine to respond just as you like it.

Improving engine response may seem like something that only matters to hot rodders and gear heads; however, as I mentioned at the beginning of this article, quick engine response can help keep you safe, too. What was surprising to me as I researched this article is how simple some of the fixes for poor engine response are. Routine maintenance, things like checking your fuel filter, can not only save you from expensive repairs down the line, but can also make your car drive better. Making sure your car performs at its best isn't just about showing off -- it's about taking care of your investment.