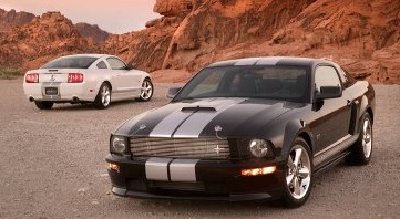 The Shelby GT was a more dynamic, more engaging version of the Mustang GT.

The 2007 Shelby GT took the "Rent-A-Racer" Shelby GT-H out of the rental fleet and put it into the hands of any Mustang fan with $38,000. Well, up to 5000 Mustang fans at least, for that was its scheduled production run.

Ford's position was that the 500-horsepower Shelby GT500 represented the ultimate in Shelby Mustang performance, and that the Shelby GT was positioned as a more dynamic, more engaging version of the Mustang GT.

"Our goal is to offer a steed for every need," said Barry Engle, general marketing manager, Ford Division. "The Shelby GT is a low-volume, extremely collectable Mustang for enthusiasts. It offers a few more customers the opportunity to experience the magic of Mustang and Carroll Shelby firsthand."

Shelby GT models began as stock Mustang GTs assembled alongside other Mustangs at the AutoAlliance International plant in Michigan. The cars were then shipped to the Shelby Automobiles facility in Las Vegas for modification before delivery to Ford dealerships.

The Shelby GT was a near twin visually to its Hertz counterpart, copying its side scoops, aggressive nose treatment, and brushed-aluminum grille with offset Mustang logo. Both hoods were secured with pins, but the Shelby GT's featured a scoop.

All GT-Hs were black with gold accents. The Shelby GT was offered in white or black, both accented by silver LeMans-style racing stripes. Matching side stripes had "Shelby GT" nomenclature. Shelby logos decorated the trunk lid, floor mats and custom sill plates. Each Shelby GT also had an "authentication plate" on the center dashboard, as well as a matching tag under the hood. This tag featured the CSM number, which is recorded in the Shelby American World Registry.

Each Shelby GT sported an "authentication plate" on the center dashboard.

The GT-H and Shelby GT were similar under the hood, as well. Both employed the Ford Racing Power Upgrade Package (FR1) for the naturally aspirated, three-valve, 4.6-liter V-8, though the Shelby GT was rated at 319 horsepower instead of 325. Both had 330 pounds-feet of torque. Modifications to intake and exhaust were similar, as was the addition of a strut-tower brace.

Both cars included a beefed-up 3.55:1 ratio rear axle assembly, but the Shelby GT came standard with a five-speed manual transmission featuring a Hurst short-throw shifter. The five-speed automatic transmission mandatory on the GT-H was an option here.

Being aimed at enthusiasts who were likely to welcome, and tolerate, a compromise in ride comfort, the Shelby GT's suspension tuning was more aggressive than that of the rental car.

"The Shelby GT is great fun on the track," said Carroll Shelby. "It's got the heart and soul of the Mustang GT pumped up with a strong motor, nimble chassis and great sound. It's one of those rare cars that's easy to drive really fast."