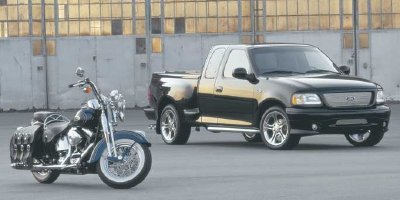 In addition to the extra-large Ford Excursion for 2000, Ford joined forces with Harley-Davidson to produce a special-edition F-150 pickup truck called -- appropriately -- the Harley-Davidson F-150.

This marriage of two icons was a marketer's dream come true, as it had crossover appeal to both pickup truck and motorcycle enthusiasts. The Harley-Davidson F-150 came only as a SuperCab with Flareside bed, and it featured distinct interior trim, special wheels and grille, and unique Harley-Davidson badging. It was offered in any color the customer wanted -- as long as the customer wanted black.

An agreement with Harley-Davidson Motor Company produced the new-for-2000 F-150 Harley-Davidson pickup truck. Available only in SuperCab form -- and only in black -- it was powered by a 260-hp 5.4-liter V-8.

The big news -- literally -- in Ford-trucks for 2000 was the new full-size-plus Excursion. Based on the Ford F-250 HD Super Duty pickup truck platform, it was advertised as the world's biggest, heaviest sport-utility vehicle. Indeed, its 227-inch length stretched out 22 inches further than an Expedition's (no small fry itself), and at 7087 lbs., was nearly a ton heavier. Engine choices included a 5.4-liter V-8, 6.8-liter V-10, and a 7.3-liter turbodiesel V-8.

The hot SVT Lightning with its 360-horsepower supercharged V-8 could run the 0-60-mph dash in under six seconds.

Explorer was little changed for 2000, continuing to be offered in four-door form (shown) and as the two-door Explorer Sport.

As a consolation for no longer being Ford's biggest SUV, the Expedition got optional front side airbags and rear obstacle detection for 2000.

With the exception of one compact SUV, Ford's offerings for 2001 were super sized. Get details and see photos on the next page.