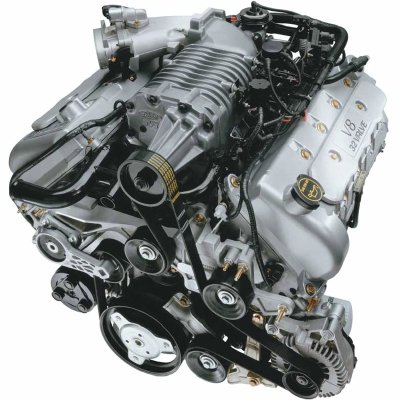 SVT went all out for 2003 by supercharging the Cobra's twincam V-8 to create the most potent street Mustangs ever.

Ford Mustang sales for 2002 were down a troublesome 18.2 percent. Ford needed to pull out the big guns to bring back buyers.

The Mustang SVT Cobra was MIA for '02, but only until spring, when the 2003 versions made an early debut packing a huge new wallop: 390 horsepower and 390 pound-feet of torque.

Taking a page from the hot-rodder's handbook, SVT bolted an Eaton M112 Roots-type centrifugal supercharger to the Cobra's twincam V-8 and made numerous changes to accommodate it. These included using an iron block for durability under pressure, plus a water-to-air intercooler, new cylinder heads, and revised pistons with suitably lower 8.5:1 compression.

You might not call it refined, as Road & Track's Doug Kott observed, "Yet it's refined enough for those who elevate performance and affordability…above ultimate sophistication.... [T]he SVT crew should be applauded for… breathing new life into Ford's workhorse."