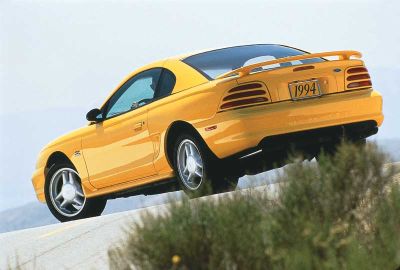 The 1994 Ford Mustang was a mostly new car that rode in on a tidal wave of anticipation and nostalgia. Ads pictured it with a classic '65 to declare, "It is what it was." Actually, it almost wasn't.

The uproar when Ford considered replacing the classic Mustang design with the front-wheel-drive Mazda-based Probe had shown that Mustang fans would never accept a Japanese-style substitute for their car.

But with demand for "real" pony cars lagging again by the late 1980s, some in Dearborn began to question the need for another new Mustang. Besides, Ford had more profitable product fish to fry (the Explorer sport-utility for one), and the old Mustangs were still selling pretty well, so why rush? With that, planning floundered for a good two years. Then Ford learned that General Motors was abandoning a planned front-drive Chevrolet Camaro/Pontiac Firebird for a new rear-drive 1993 concept. Corporate pride demanded a proper reply, so a new Mustang program was underway by early 1989.Code named SN95, this effort began with a round of consumer clinics per Dearborn tradition, what PR flacks later called "gallop polls." This time, however, unusual weight was given to the views of Mustang owners. Topping the wish lists were modern styling with hints of the original, a cheap and easily serviced V-8, rear-wheel drive, a low base price, and plenty of options: In short, a brand-new good old Mustang.Because Ford had become a leaner organization, and with the "team concept" now gospel throughout Detroit, SN95 developed quite differently from earlier Mustangs.The big departure was the formation of a fairly small, independent multi-profession project group. Key figures included overall manager Mike Zevalkink, business manager John Coletti, designer manager Bud Magaldi, interior designer Emeline King, engineering manager Kurt Achenbach, and powertrain manager John Bicanich. All reported to Will Boddie, then director for small and midsize cars.Considering the legend entrusted to them, the SN95 team worked on a surprisingly modest budget: $700 million in all, with a mere $200 million earmarked for design and engineering. By contrast, Ford spent an industry-record $3 billion on the trend-setting 1986 Taurus.

Design work for the '94 Mustang was underway by early 1989. Cnsumer clinics showed strong preference for modern lines blended with traditional Mustang signatures. Early concepts varied from mild to wild (as in this sketch) .

The limited funds ruled out a new platform, even though Mustang was now the sole survivor of the original Fox family and Ford had newer foundations available. (Rumors briefly swirled about a cut-down version of the '89 MN12 Thunderbird.) The timing was also stingy: just 36 months.

It came down to three very different Mustang mockups for the final '94 style, nicknamed "Bruce Jenner," "Rambo," and the winning mockup, "Arnold Schwarzenegger." Keep reading to learn how the '94 Mustang got its good looks.