The 1999 Ford Mustang Chassis and Engines 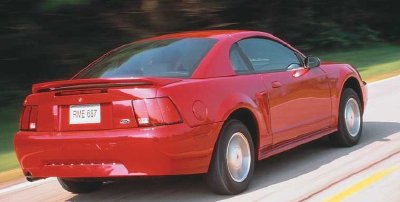 "New Edge" good looks were easy on the eyes, but potential buyers also wanted to know what was going on under the hood of the 1999 Mustang models.

For agility, rear track on all models was widened by 1.4 inches (thus equaling the front dimension), and a 1.5-inch higher transmission tunnel allowed a little more upward wheel travel. Smaller-diameter antiroll bars and retuned shock absorbers were specified to improve ride compliance with no harm to handling despite adoption of firmer springs. GTs switched from variable- to linear-rate coils for the same reasons.

The 3.8's horsepower jumped by 40 to 190, torque by five pound-feet to 215. A new contra-rotating "balancer" shaft did nothing for performance but did dampen second-order vibrations for smoother running.

As before, an antilock brake system (ABS) was standard for GTs and optional on base models ($500). An extra $230 bought the additional "active safety" of traction control, Mustang's first. Spearheaded by chief project engineer Janine Bay, this used the ABS wheel-speed sensors to detect wheel slippage. In the event, system electronics would retard spark and reduce throttle opening until traction was restored (wheel speeds equalized).

At higher road speeds (up to 62 mph), the traction-control system could also brake either rear wheel as needed, hence the advertising moniker "all-speed traction control." A dashboard "off" switch enabled drivers to let it literally all hang out when conditions, and skill, allowed.

Mustang fans were happy to greet the '99 Mustang SVT Cobra a few months after the rest of the Mustang lineup debuted. Keep reading to learn about the SVT Cobra's special touches, including Mustang's first independent rear suspension (IRS).