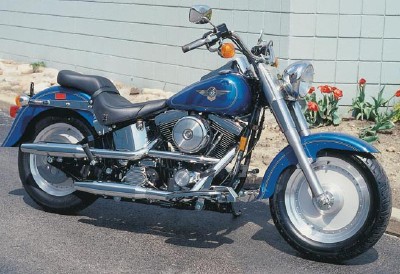 After 1990, Fat Boys were available in a variety of colors, including two-tones. See more motorcycle pictures.

The 1997 Harley-Davidson FLSTF Fat Boy motorcycle carried on the design themes that made the original 1990 Fat Boy such a success. But there was one important difference.

Introduced in 1990, the Fat Boy instantly became one of Harley-Davidson's most popular models.

Over the next decade, waiting lists for the machines sometimes stretched as long as two years.

The original Fat Boy came in any color you wanted -- as long as you wanted gray. Fenders, fuel tank, oil tank, and even the frame were all painted the same hue, with fine yellow trim being applied around the valve covers, ignition switch, primary-cover inspection plate, timing cover, and within the winged tank emblem.

But the most noticeable element of the Fat Boy's styling were the 16-inch solid wheels used both front and rear; it remains, to this day, the only model so equipped.

Fat Boys rode the Softail frame that hid its shocks beneath the engine. Power came from the 80-cubic-inch Evolution V-twin introduced six years earlier, and like all Harleys since, the Fat Boy used belt drive.

After 1990, Fat Boys were available in a variety of colors, including two-tones -- though grey was never again offered. Otherwise, however, they changed little until a redesigned model sporting Harley's new Twin Cam 88 V-twin arrived in 2000.

Yet the company knew to leave well enough alone, and the 1997 Fat Boy is nearly indistinguishable from the original.

Except for that gray paint.... 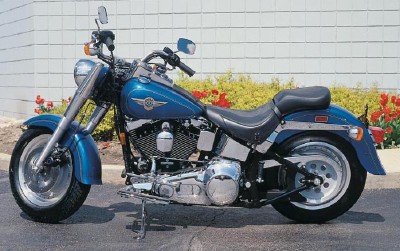 In its shape and use of solid wheels, the 1997 Harley-Davidson FLSTF Fat Boy motorcycle was nearly indistinguishable from the original 1990 model.

The tank-mounted instrument panel is standard Harley practice.
The headlight treatment dates from 1949, and was a classic Harley wasn't shy about reviving.
Fat Boy power is from an 80-cubic-inch Evolution complete with monogrammed air cleaner.