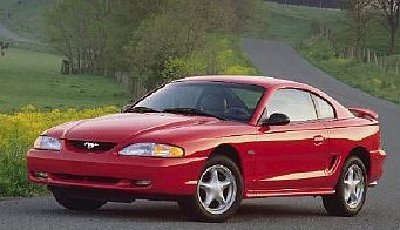 The 1996 Ford Mustang GT dumped its pushrod V-8 for a modern single overhead  cam iron block V-8 with two valves per cylinder in aluminum heads  underhood changes to make it fit, only a small exterior badge announced its presence.

The 1996 Frod Mustang ushered in a new engine era when, after nearly 40 years, Ford retired its overhead-valve small-block V-8 and bolted in the overhead-cam "modular" V-8. This basic engine had been introduced five years before in the big Lincoln Town Car.

There were two versions of this 4.6-liter (281-cubic-inch) V-8, one for GTs, the other for Cobras. GTs used a single-cam iron-block iteration with two valves per cylinder in aluminum heads. It didn't look like progress, claiming the same power and torque as the 302. And straight-line performance was down a bit, C/D netting 6.6 seconds 0-60 mph and a quarter-mile of 15.1 at 92 mph. But the "mod" would rev faster and higher, made similar torque at low rpm, and was smoother and quieter. More pointedly, it was able to meet future emissions standards; the old pushrod V-8 couldn't.

After testing all three, C/D ranked the Cobra behind a top-power '96 Camaro SS but ahead of a similarly optioned Firebird Formula. "It's the best daily-driver muscle car," C/D asserted. "Its DOHC 32-valve V-8 is the smallest but highest-tech of the engines here. It convincingly makes as much horsepower but less torque than the 5.7-liter powerhouses, [yet the Cobra] turned in darn near the same performance, thanks to its lighter weight. True, it was slower than the Camaro and only marginally quicker than the Firebird in several areas, but it [was] the one car we would most want to drive home at the end of a long day." Some things never change.

Mustang power entered the modern era for 1996 with adoption of Ford's overhead- cam 4.6-liter modular V-8s. The GT's ran a single-cam version, shown here, which had the same 215 horsepower as the 5.0-liter pushrod V-8 it replaced.

Other things did. Because the "mod" engines were taller than the pushrod V-8, Ford had to redesign the front chassis crossmember, reposition the steering rack and lower front suspension arms, change engine mounting points, and devise a more compact brake booster.

Slightly sprightlier handling was a happy benefit of these changes to accommodate the lighter engines. Attaching the alternator, A/C compressor, and power-steering pump directly to the blocks reduced underhood clutter. The "mod" V-8s also introduced modern "coil-on-plug" ignition with no distributor, improving efficiency and reliability.

Elsewhere for '96, Mustang's V-6 received a stiffer block and 10 more horsepower for 150 total, plus the new V-8's platinum-tipped spark plugs, designed to last 100,000 miles. Transmissions were ostensibly the same, but the five-speed manual was exchanged for Borg-Warner's beefier new T45 unit, and the AOD automatic was swapped for Ford's latest 4R70W transmission with more sophisticated electronic controls.

Outside, the pony grille emblem got a mesh backdrop, and the horizontal taillamps gave way to three-element vertical clusters, which made the car look narrower to some eyes.

A sign of the times was a new "passive anti-theft system" (PATS) for GTs and Cobras. Optional for base models, this used a special ignition switch that required a matching coded key for starting. In the event of a hot-wiring attempt, the ignition system shut down altogether.