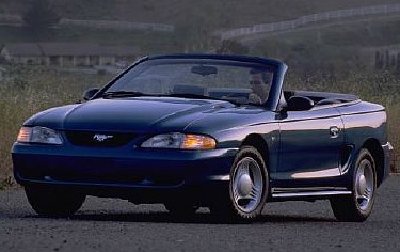 The 1994 Ford Mustang garnered mixed reviews. Experts said the car  wasn't changed enough, and that it should have more power.  The base '94 Mustang convertible is shown here.

To its creators' undoubted dismay, the 1994 Ford Mustang garnered mixed reviews. While road-testers lauded the many changes, there was general head-scratching over the GT's 60-horsepower deficit against the latest 275-horsepower Camaro Z28 and Firebird Trans Am.

"The carryover power may challenge the loyalty of some [Mustang] fans," mused Car and Driver, "[though] with substantial improvements in braking and body structure, the Mustang [GT still] offers tremendous performance for the dollar."

The automatic version was no slouch either, Consumer Guide® timing a brisk 7.4 seconds. But as Road & Track pointedly noted: "A 60-horsepower shortfall is a lot of horsepower." Ford shot back that Mustang aimed at those who valued overall finesse, not just straight-ahead thrust. Going toe-to-toe with GM power was not the first priority.

The '94 Ford Mustang GT coupe had a 60-horsepower deficit against the latest   275-horsepower Chevy Camaro Z28 and Pontiac Firebird Trans Am.

So what was? Well, several team members admitted the main mission was to satisfy the 6.1 million folks who'd bought Mustangs since day one. While that implied sizable demand for the new models, it also suggested that sights hadn't been set very high. As Motor Trend observed: "Mustang fans have been deprived of a new platform for so long they would've accepted almost anything with a chrome horse on it."

Of course, they did accept it, and with enthusiasm. And why not? They had helped to design it. And after MT's editors surveyed the field, they choose the 1994 Ford Mustang as "Car of the Year."

"Mustang," they wrote, "is once again a car to be coveted.... Viewed from both an industry and buyer's perspective, we weighed technological advancement, value and performance to determine the one standout car for '94. The Ford Mustang is that car."

Helping mark Mustang's 30th anniversary was an appointment as the  1994 Indy pace car. The red pace convertible is shown here with the 1965 and 1979 Mustang Indy pace cars.

The MT award was a nice kickoff for Mustang's 30th anniversary year. Ford hosted several big parties on Sunday, April 17, 1994. One was staged in conjunction with the Mustang Club of America at Charlotte Motor Speedway. Among the throng of people and cars on hand was one William Jefferson Clinton. The President of the United States showed up with his rather well-used '67 convertible.

The event also welcomed 200 cars driven from as far away as Sacramento, California, in a six-day "Mustangs Across America" rally. Down L.A. way, the "Fabulous Fords Forever" show, then in its ninth year, was the end point for a cross-country "International Mustang Roundup" comprising 16 cars from three European countries.

The celebrating didn't stop there. Recalling 1964, Ford got Mustang selected as Indy 500 pace car. Engine master Jack Roush souped up a trio of new Cobra convertibles for Memorial Day track-wheeling by Ford CEO Alex Trotman and legendary drivers Parnelli Jones and A. J. Foyt. It was the first public outing for the '94 Cobra, though it had started production in February and was always part of SN95 planning.

Again for 1994, the Ford Special Vehicle Team produced the powerful Mustang Cobra, with exclusive speed-oriented features and stylish touches. Get all the details about the '94 Cobra on the next page.