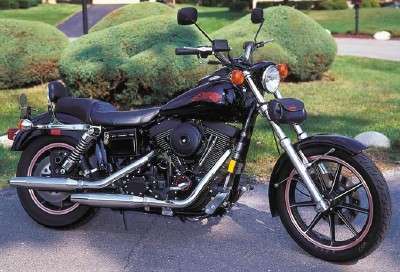 The first time Harley-Davidson produced a special model to commemorate the annual motorcycle rally in Sturgis, South Dakota, was in 1982.

At that time, a Shovelhead V-twin engine sat between the frame rails. Harley's next rolling celebration of Sturgis came with the 1991 FXDB Sturgis. It was powered by the Evolution V-twin introduced in 1984, and it rested in a new Dynaglide chassis.

The 1991 Sturgis marked the 50th anniversary of the famed Black Hills rally. As with the first such model, the paint scheme centered around black with orange trim, Harley's corporate colors.

Unlike most of the company's models, chrome was used sparingly, gracing only the forks, exhaust pipes, and miscellaneous trim bits.

Continue to the next page to see more 1991 Harley-Davidson FXDB Sturgis motorcycle pictures. 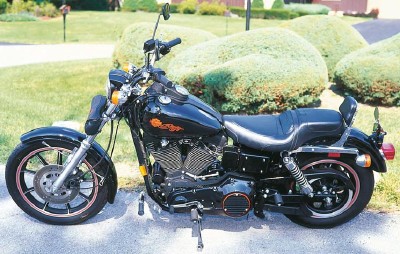 The FXDB Sturgis was powered by the Evolution V-twin, and it rested in a new Dynaglide chassis.

Tank-mounted gauges were standard Harley practice, but the housing was coated in wrinkle-finish black rather than the traditional chrome.
The Evo V-twin was also bathed in black, which, along with subtle orange accents, reflected the overall theme.
Chrome was used sparingly, gracing only the forks, exhaust pipes, and various trim bits.
This 50th anniversary motorcycle featured chrome accents and Harley-Davidson's corporate colors -- black and orange.