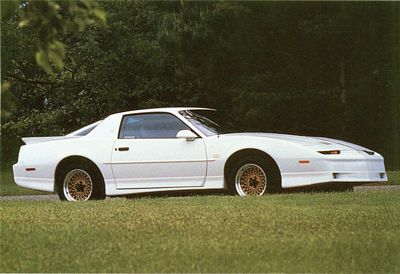 GTA, said one sales brochure, stands for "Good Times Ahead!" Pontiac Firebirds were proving less popular than Camaros, but they held a loyal following of buyers from different age groups, who relished its flashy styling and muscular performance. Chevrolet now marketed a convertible, but Pontiac wasn't ready to slice the top off its Firebird just yet. Thus the 1988 Pontiac Firebird Trans Am GTA.

As in 1987, there were base and Trans Am editions, plus a Formula package for the base model and the sizzling GTA (at a whopping $19,299). Both Formula and Trans Am came with a standard 170-horsepower V-8, but could be ordered with a high-output edition that featured multipoint fuel injection. With manual shift, that engine delivered 215 horsepower. Automatic slashed output to 190 bhp (though torque output actually was higher).

Heading the performance parade again was the 5.7-liter V-8, boosted to 225 horsepower-standard with the GTA package, optional in Formula or Trans Am for an extra $1,045. GTA equipment expanded to include a remote decklid release, power antenna, power windows/locks, theft-deterrent system, cruise control, and tilt wheel. More surprising yet, the GTA was offered in notchback, as well as hatchback, form-a short-lived but interesting choice.

Carburetors were gone -- never to return -- on all engines. Base models adopted monotone paint and aluminum wheels. They carried a fuel-injected 2.8-liter V-6 or the optional 170-bhp V-8.

Full-bore performance freaks might be tempted by the Banks/Pontiac Twin Turbo GTA, whose 7.5-liter mill delivered a 268-mph run at Bonneville, hitting 283 mph along the way. Now, that was one fast Firebird.