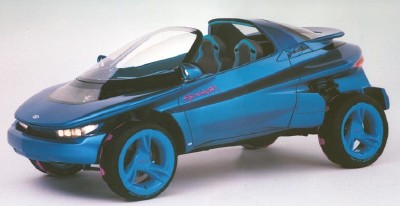 Nobody ever said concept cars couldn't be fun, and no vehicle ever demonstrated that idea better than the 1988 Ford Splash concept car. Ford's free-spirited, youth-oriented Splash concept vehicle flaunted its pleasures brazenly, without a hint of shyness. The colorful four-seater -- the creation of a quartet of talented young design students -- owed its origin more to the Volkswagen Beetle-based dune buggies of California than to humdrum passenger cars, or even to conventional sports cars.

Company publicity, in fact, barely let on that the multipurpose Ford Splash concept car was created with motoring in mind. Instead, it was described as "the ultimate toy for those who like water sports."

Water, in fact, served as a basic theme. Splash was supposed to be a vehicle that served as transportation to the beach or the ocean, carrying scuba or surfing gear and as many as four revelers.

However, anyone older than 25 was sure to wonder just where those two in the back could possibly have squeezed in when the roof panel was in place. Cramped? Sardines would probably cry out for more elbow room.

If nothing else, the Ford Splash concept car was colorful. Flamboyantly so. Youthfully so. No dowdy grays or wilted browns here, to detract from the feeling of wild abandon.

Both the body and the interior were decked out in fluorescent blue with magenta accents, intended to deliver a never-ending aura of being out in the fresh, open air. The matching wheels were similarly colored. Upholstery wasn't tacky plastic or conventional fabric, but a rubberized material like that used in wet suits. Not much harm could be done if guests flopped down wearing their dripping swimwear.

Wedge-shaped profiles with low front ends and high decks had become standard fare on cars of every stripe, but nothing on the market displayed as steep a forward rake as the Ford Splash concept car.

The interior of the
©2007 Publications International, Ltd.

Much of it was illusion, though, as the car actually sat fairly level to the ground. A big bubble windshield matched the curved back window. And if you needed more than a breath of that sea air, you could remove the windows, roof panel, and hatch to let in all the air you could handle.

As the snow flew, however, windows and a roof would sound sensible indeed, and you may have wanted to tack them on as you packed skis into the Splash for a jaunt to the slopes. Yet summer or winter, safety was part of the Ford Splash concept car design concept, with its integral roll cage and four-point harness seatbelts for each occupant.

The 1988 Ford Splash concept car had more interesting design features that married style and safety. Go the next page to learn about them. 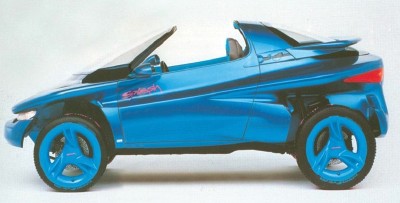 The 1988 Ford Splash concept car was an all-wheel-drive two-passenger roadster; a roof panel and windows could be fitted, however.
©2007 Publications International, Ltd.

Though the theory behind the 1988 Ford Splash concept car design was wild adventure, the little machine had some very sensible features.

High-mounted, high-intensity driving lamps, for example, were retractable for daytime running, but could be let out for nighttime off-roading. Mud flaps moved upward, out of the way during off-road travel, but could be lowered for highway driving to protect the car's body from stones and mud.

A variable ride-height system adjusted to suit a variety of conditions, so that around town or rolling down the highway, the Ford Splash concept car could be lowered to the level of an ordinary automobile. Pull off the road and onto the desert, and it would quickly rise to give the added ground clearance that was needed to prevent bottoming on rough terrain.

Just about every auto enthusiast has scribbled down a design or two for a dream car of some sort -- often during high-school study periods. Very few of them ever get an opportunity to let the products of their imaginations take actual shape; certainly not under the auspices of a major auto manufacturer. Yet that's exactly how the Splash came into existence.

The Ford Splash concept car was created not by a multi-member professional design team, but by a quartet of transportation students at the industrial design department of Detroit's Center for Creative Studies. Assigned to the project by Jack Telnack, Ford's Vice President of Design, the students were asked to "design and build a vehicle they would like to use year around as well as on a summer weekend."

Work began in the spring of 1988, with the hiring of the four students -- Brad Baldonado, Chris Gamble, Warren Manser, and Ricky Hsu -- who devoted their summer vacation period to creating a vehicle.

The students were given plenty of freedom to decide on the type of vehicle they wanted, how big it might be, and the design theme. Only one tangible goal was suggested: that it be "flexible, youthful, exciting and just plain fun."

Ford wanted to see a vehicle that might appeal to a broad spectrum of young and entry-level drivers, not just to a narrowly focused group. Like everyone involved in the auto industry, Ford values the youth market.

The under-25 crowd's spending power and untapped brand loyalty can't be ignored. Everybody wants to attract that segment of the market, but not everyone seems to know what might appeal the most. Splash, was one possible answer.

To learn how Ford executives went from desiring a vehicle that would appeal to the under-25 demographic to actually building one, go to the next page. 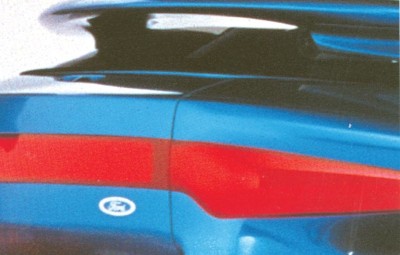 Ford turned to young design students to create the 1988 Ford splash concept car, a vehicle that would appeal to their peers.
©2007 Publications International, Ltd.

NOTE: The Splash was a design exercise only, with no engine.