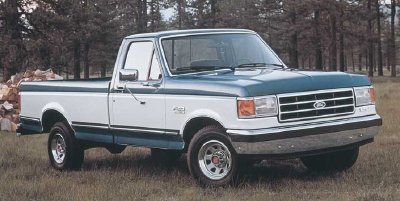 A new line of Super Duty Ford F-350 trucks was introduced for the 1988 model year. These trucks filled a gap between the regular F-350s and the medium-duty F-600s. Standard was a 7.5-liter V-8 engine, while a 7.3-liter diesel was optional. F-Series also dropped its available Flareside bed, although it would return a few years later.

Bigger news for 1988 -- literally -- was the introduction of a sleek new Class-8 truck called the AeroMax. Although the cab was similar to that used for Ford's L-Series Louisville trucks, the front end was given an aerodynamic look and the interior was spruced up.

Ford dropped its stylish Flareside truck bed for 1988, meaning all pickups carried the Styleside bed shown on the F-150 pictured above. All engines now boasted fuel injection, but otherwise, the F-Series was little-changed after its 1987 facelift.

The Ford Ranger was a virtual carryover for 1988, although newly available for two-wheel-drive regular cabs was a GT package with sport suspension, front spoiler, and side skirts.

The L-7000 was a lighter-duty version of the heavy-duty L-Series line that effectively fell into the medium-duty segment. Confusing, perhaps, but it made sense to a lot of buyers.

Slipping into the limelight for 1988 was the AeroMax, which upped the ante in Class-8 aerodynamics. Featuring swept-back front fenders and a form-fitting front bumper -- both made possible by the setback front axle -- it made for a sleek update to what was essentially an L-Series truck. Wraparound headlights added a modern look, while tank skirts and an available "Aero Bullet" sleeper unit made the AeroMax more slippery to the wind.

Ford Rangers and Bronco II finally had their turn for a redesign in 1989. Continue to the next page to find out how Ford finished the decade strong.