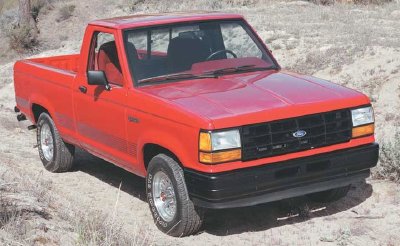 For 1989, Ford's Bronco II and Ranger were restyled for the first time since their introduction, getting -- you guessed it -- aerodynamically sleeker front ends. The Ford Ranger also added the standard rear-wheel anti-lock brakes the Bronco II had received two years earlier. New for the Aerostar minivan was a "midi" version with a longer body.

After many stand-pat years on the styling front, Ranger finally got a sleek new front end for 1989 that mimicked the look of its Ford F-Series big brother. Interiors were also new, as were the standard anti-lock rear brakes. A twin-plug head on the 2.3-liter four boosted horsepower by 10 to an even 100. A 140-hp 2.9-liter V-6 was also available.

The 1989 Bronco II shared the Ford Ranger's restyled front end and interior, but little else was new.

Two-wheel-drive versions of the 1989 F-150 wore "EFI" (Electronic Fuel Injection) badges below the left-side headlight as shown above. Expanded availability of the four-speed automatic transmission to heavy-duty two-wheel-drive models was the only change of note to Ford F-Series pickups for 1989.

Ford's Bronco carried over virtually unchanged for 1989. It offered a number of powertrain choices, including a 4.9-liter six, 5.0 V-8, and 5.8 V-8 (all fuel injected), along with four- and five-speed manual transmissions, and three- or four-speed automatics.

As the decade wound to a close, Ford found itself in a rather enviable position. The F-Series was established as the nation's best-selling vehicle, the Ranger was the best-selling compact pickup, and the rest of the trucks -- all the way up to the heavy-duty Class 8 entries -- were strong competitors in their respective segments. All in all, Ford was in fine fettle to enter the Nineties.