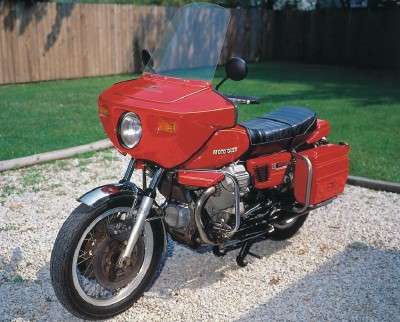 The 1976 Moto Guzzi V1000 Convert was distinguished by a torque converter that imparted some of the convenience of an automatic transmission. See more motorcycle pictures.

The 1976 Moto Guzzi V1000 Convert motorcycle was one of the first beneficiaries of Moto Guzzi's decision to boost its V-twin from 700 cc to a full one liter, but its real claim to fame is a two-speed transmission with torque converter.

Though the big Guzzi still used a transmission, it had only two speeds. The clutch had to be disengaged to manually shift between low and high gear, but thanks to the torque converter, the rider could come to a complete stop in either gear and then accelerate away without touching the clutch or the gearshift lever.

By this time, some of the company's products were focused on the sport-touring market, but the Moto Guzzi V1000 Convert motorcycle was never considered as such.

For one thing, it tipped the scales at nearly 600 pounds and was not well-suited to fast cornering.

It also didn't accelerate with much verve, as the weight, gear ratios, and torque converter all contributed to lackluster performance. But as a pure touring machine, it had much to offer. 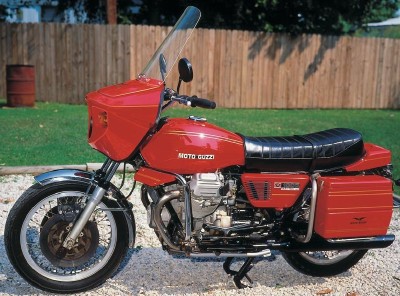 The V1000 Convert was more at home on long tours than on tight, twisting roads.

The speedometer was flanked by a bevy of warning lights -- but no tachometer.
Moto Guzzi's Convert system meant the rider need neither shift nor de-clutch when coming to a stop -- a boon in stop-and-go traffic.
The V1000 came equipped with "lunch box" side bags and taillight housing.
Moto Guzzi first began building motorcycles in the 1920s and remains a respected Italian maker.