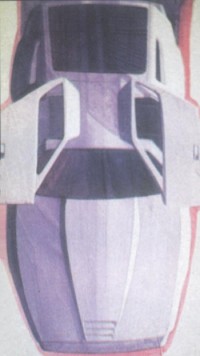 Designer Herb Grasse did an early top-view rendering of the Bricklin SV-1.
PIL

The first Bricklin concept car, latter dubbed Grey Ghost, was built by Bruce Meyers of Meyers Manx dune buggy fame in California. Its initial powerplant was a Valiant Slant Six. But that engine, as well as an Opel powerplant from General Motors of Germany, was tossed aside. No matter, the first design was unfeasible for production, anyway. A total redesign was necessary.

Prototype number one was originally to be fitted with an Argentinean motor and five-speed manual transmission, but it didn't arrive in time and was replaced by an American Motors drivetrain. This was to be the forerunner of the 1974 SV-1, 772 vehicles powered by AMC's trusty 360-cubic-inch V-8 with a four-barrel carb.

Prototypes one, two, and three were a collaboration by Bricklin Vehicle Corporation; Herb Grasse Design; and AVC Engineering, a fabrication shop run by Bob Urbant and Tom Monroe. Monroe was responsible for the final chassis design.

The first SV-1s were hand assembled by designer Herb Grasse, whose company was made up of a group of young, motivated designers and modelers eager to share the experience of creating a new car. The initial body was developed in clay to manufacturing tolerances. Using automotive styling techniques on clay mock-ups and visual aids, Grasse was responsible for the total design.

The full-scale clay model was undertaken in Romulus, Michigan.
PIL

AVC Engineering's Tom Monroe was selected Chief Engineer of Design. He was fully responsible for chassis development and the handling personality of the car. Mike Steifanti replaced Tom as Chief Engineer after Tom left for dubious and sundry reasons. Allan Cross came on board from Ford to help plan the building of the chassis, and shuffled over to John Z. DeLorean's new operation after the factory shutdown. AVC's Livonia, Michigan, facility later doubled as a dealer prep and customer service center.

Herb Grasse, an alumni of the prestigious California Art Center College of Design, took the early mock-up of the interior, instrument panel, and crash pad layout and fine tuned it. He jettisoned the original haphazard pod-like effect, creating instead a considerably more driver-friendly cockpit.

The early design proposal for the instrument panel was never used in production, though it had full instrumentation and a large speedometer and tach.
PIL

Dashboard visibility, though somewhat hampered by the leather-covered steering wheel, was greatly enhanced via improved placement of the gauges. The combination of full instrumentation and back-up idiot lights was a plus for even the most discriminating Mario Andretti "wannabe."

The barely below-eye-level crash pad made it mandatory for the driver to sit upright in the "no-slip security" of simulated suede bucket seats (a safety feature). Visibility was further hampered by the sharp slope of the rear hatch glass, necessary to maintain the sleek lines incorporated into the space-like vehicle. This was a rarity in the early Seventies when a 240Z was considered the ultimate sports car.

Further, the rear quarter windows riding behind the shark-like gills on the wide B-pillars were tiny, more ornamental than functional. Wheelwell openings were deliberately made large enough to accommodate a set of road-burning 15-inch tires without sacrificing turning radius or raising the beltline to an unacceptable level. The low roofline would most certainly flatten tall people's "pomp" hairdos, but the high hood center promised unlimited power out of a V-8 that roared like a lion when asked.

Designers and engineers stand with the finished first prototype of the Bricklin SV-1.
PIL

Following the prototype designs and consultation work, Herb Grasse went on the Bricklin payroll in 1974, and most people with the firm migrated to Scottsdale, Arizona, to establish a second design center. Bricklin wanted to keep his finger on America's automotive pulse.

After the firm folded, Grasse moved to Australia to become Principal Designer for Ford Asia-Pacific. There he remained for 16 years, after which he returned to Scottsdale to found Grasse's Motoring Archives, one of the largest automotive literature outlets in the Southwest. Though retired, Grasse's interest in the Bricklin remains strong.

To see how the designs translated into the 1974 Bricklin SV-1, continue to the next page.