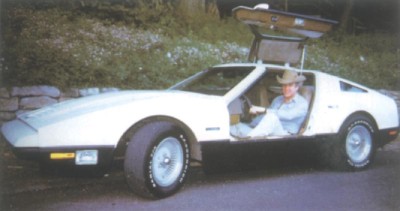 After dealing in hardware, motor scooters, and the tiny Subaru 360, Malcolm Bricklin decided to build his own car, the 1974-1975 Bricklin SV-1. It would ride a rocky road.

The early 1970s promised to put a damper on street performance as it had been known in the muscle-car 1960s. With the introduction of the new Environmental Protection Agency (EPA) smog standards, everybody in the auto business was in a tizzy. There was also talk of mandated fuel economy standards, catalytic converters, and smog pumps.

The further restriction of possibly having to use lower-octane unleaded gasoline was practically unthinkable. Would a car even move without the lead needed to add some "kick" to the fuel? Ethyl Corporation's early testing of unleaded gas was extremely disappointing.

Engines that had been test-run merely a fraction of normal life expectancy were disassembled only to reveal that harmful deposits had already taken a heavy toll. Privately, Ethyl chemists and engineers advised their friends to use only leaded fuel, official recommendations to the contrary.

This photo of a Bricklin clay shows the basic design very close to what was ultimately adopted for production.
PIL

Were upcoming new cars all going to be gutless wonders as some predicted? The main question asked by enthusiasts was: "Has the day of the muscle car finally come to an end?"

The Federal Motor Vehicle Safety Standards Code (FMVSSC) had become the final word regarding car manufacturing since 1967. Adhering to the code meant your livelihood if you were producing anything that resembled a car and used public highways for mobility. The loophole was that a car wasn't considered a vehicle under the guidelines if it weighed less than 1,000 pounds. This spelled opportunity for Malcolm Bricklin.

Bricklin's dream began taking shape after he sold his Handyman America operation, a chain of hardware stores based in Orlando, Florida. He reportedly made a few million on the sale. He went on to import Italian Lambretta motor scooters and Japanese Rabbit scooters made by Fuji Heavy Industries Limited. The latter connection led to Bricklin's founding Subaru of America, which he prematurely sold out to a partner who continued on to great success.

Bricklin meanwhile imported the tiny Subaru 360 (made by Fuji), totally circumventing the FMVSSC because of the car's lightweight construction (about 900 pounds). Unfortunately, the car was condemned by both Consumer Guide®, which called it "the most unsafe car on the market," and Ralph Nader, the Unsafe at Any Speed public watchdog.

SV-1 stood for Safety Vehicle-1, and indeed all five colors offered had 'Safety' before the name. This Bricklin was painted Safety Orange.
PIL

A brainstorm of putting go-cart bodies on 360s and renting them out on enclosed tracks called Fastrak wasn't the solution, either, so Bricklin bailed out. It was now 1972, and the stage was set for his next move.

Bricklin envisioned a car that would set America on its ear, one that not only met but far exceeded all safety standards. That car would be the Bricklin SV-1 -- Safety Vehicle-1 -- promoted as "the first production car that is truly worthy of being called a safety vehicle." Gull-wing doors, hyped as "practical, as well as safer than ordinary doors," were part of the package.

The car would sell for $3,700, the same price as a 1972 Chevy Impala and fully $1,500 less than a Corvette Stingray. It would be available to the average person who could do his own repairs with readily available American parts. The automotive climate was right and the time was now!

To see how Bricklin embarked on his dream with the first Bricklin concept car, continue to the next page.