As if five all-new Ford Mustangs weren't enough when the 1969 model year began, Ford had two additional ideas in mind, the 1969 Ford Mustang Boss 302 and 429. The twin "Bosses," each introduced later, proved to be some of the most remarkable Mustangs of the "ponycar's" entire life span.

Had Henry Ford II not hired Semon E. "Bunkie" Knudsen away from General Motors early in 1968, to become company president, the whole "Boss" episode might never have occurred. Knudsen felt that a super-hot small-block soon would be needed to compete against Chevrolet's Camaro Z-28. A street version of the racing Mustang that had torn up Trans-Am courses sounded like just the ticket.

Besides that, Ford had come up with a 429-cid V-8 that it needed to homologate for NASCAR competition. Now wouldn't that make a nice trophy under a few hundred roadgoing Mustang hoods? Two cars -- two engines -- two different personalities.

In addition to his contribution toward this year's new SportsRoof fastback body, stylist Larry Shinoda -- hired by Ford along with Knudsen -- earns credit for the "Boss" name. The big Boss came first, in mid-January, wearing a monstrous Ram-Air hood scoop and front spoiler, with chubby F60 x 15 Goodyear Polyglas tires pounding the pavement.

Kin to the 429-cid V-8 aimed at NASCAR, the "semi-hemi" engine was built for toughness, with four-bolt mains and a forged steel crankshaft. A 735-cfm Holley four-barrel straddled the high-riser manifold. Cylinder heads were aluminum, with cast magnesium covers.

Some early engines had hydraulic lifters, until solid tappets became standard. Even Ford admitted that the 375-bhp official rating was understated. Torque output was listed at 450 pounds/feet. Whatever the actual figures, a Boss 429 could accelerate to 60 mph in as little as 5.3 seconds (or as slowly as 7.2), running the quarter in just over 14 and hitting 102 mph.

Extensive metalwork was required to squeeze in the bulky 429. Kar Kraft of Brighton, Michigan, did the custom work, which included widening spring towers, installing shorter upper control arms, and lowering the suspension. Staggered shocks and a "clamp-on" stabilizer bar were installed at the rear. Eschewing flashiness, Boss 429s wore no striping but carried a black spoiler and grille.

Learn about the improved and better-selling 1969 Ford Mustang Boss 302 on the next page. 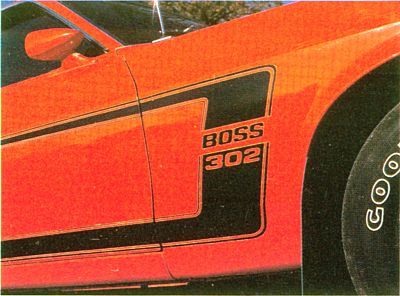 The Boss 302 engine was accused of producing more than its rated 290 bhp.
©2007 Publications International, Ltd.