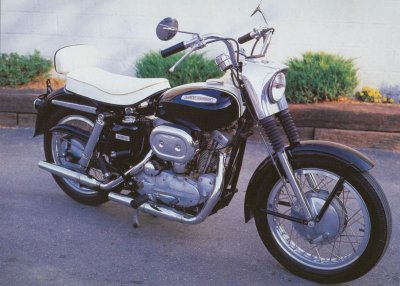 The 1967 Harley-Davidson XLH Sportster was Harley's "luxury" model for the Sportster line.

For 1967, Sportsters offered the electric starter introduced on Big Twins two years earlier. However, it was only available on the XLH version; the sportier XLCH stuck with a kick starter, which remained on the XLH as a back-up to the electric leg.

The Harley-Davidson XLH Sportster offered a larger fuel tank than the XLCH.

As before, the XLH also carried fancier trim, including a large polished headlight nacelle, chromed rear shock covers, and a larger fuel tank.

Harley-Davidson ads in 1967 boasted of the Sportster's record-setting runs at Bonneville. Though these were highly modified machines, the company could still claim that "Nobody builds a faster stock motorcycle."

The Sportster's performance at Bonneville helped boost sales of the XLH.