It's commonly believed that the 1967-1969 Chevrolet Camaro was just a me-too response to Ford's Mustang, but it just isn't so. Though quite by accident, Chevrolet's Corvair Monza had uncovered the huge market for sporty compacts that Mustang exploited. What's more, General Motors had contemplated a Mustang-type car better than two years before the Ford's stupendous mid-1964 launch.

Nevertheless, some General Motors executives felt their restyled, second-generation Corvairs would stem the stampede to Mustang-style "ponycars." Yet however handsome, the '65 Monza and its kin retained an air-cooled, rear-engine design that was just too quirky to sell well against the orthodox, $2,500 Falcon-based Mustang. And because it remained technically unique within the Chevrolet family, Corvair was a costly bother to build. So, even as the redesigned '65 models were debuting, GM managers were deciding that the Corvair would be allowed to fade away.

A key early decision was to combine unit construction with a front subframe that cradled the engine/transmission package on large rubber mounts to minimize noise, vibration, and harshness. Front suspension involved the usual wishbones and coil springs, but with the springs between the arms instead of atop the upper ones, which benefited handling. Unfortunately, the rear suspension had cheap "Mono-Plate" single-leaf springs that allowed severe axle tramp in hard acceleration with the planned V-8 engines. Because this went undiscovered until the 11th hour, V-8 Camaros had rear traction bars for '67, then added staggered shocks, though neither was a genuine cure. Easy rear-end bottoming was another flaw.

Keep reading to learn about the styling and sales success of the 1967-1969 Chevrolet Camaro.

By 1968, competition had heated up to the point that the Chevrolet Camaro engine offerings expanded to include Chevy's big-block 396 with up to 375 bhp.
©2007 Publications International, Ltd.

Styling of the 1967-1969 Chevrolet Camaro, on the other hand, was nearly perfect: chiseled yet flowing, and decisively different from Mustang. Naturally, it was created under the watchful eye of GM design chief Bill Mitchell -- who ironically didn't much like the finished product.

Again mimicking the Ford Mustang, the Camaro aimed to be all things to all sporty-car buyers. The choices began with a basic hardtop coupe or convertible with 230-cid six. From there you went to a 250-cid six ($26), 327 V-8 ($106), or 350 V-8. The last, though, was tied to a $211 Super Sport package comprising stiff suspension, D70 x14 tires, modified hood with extra sound insulation, and "bumblebee" nose stripes. From midseason, a pair of 396 big-blocks (325 and 350 bhp) was offered through dealers to get around a GM ceiling on "excessive" small-car displacement and horsepower.

Camaro may have trod Mustang's trail, but was successful on its own. Though Mustang outsold it for 1967, Camaro's 220,000 orders represented fully 10 percent of Chevy's total volume that year. Among them were 100 "Official Pace Car" convertibles from the Indianapolis "500" (not publicly sold) and 602 of the now-legendary Z-28s.

The Chevrolet Camaro was face-lifted for '69, gaining modified side sculpturing in addition to new grille and taillight treatments.
©2007 Publications International, Ltd.

The '69s saw more extensive revisions -- a good thing, as they would sell into early 1970 pending a delayed, all-new second-generation Camaro. A deft lower-body reskin introduced a vee'd eggcrate grille, "speed streaks" above the wheelarches, and a reshaped tail. RS headlamps remained hidden when off, but glass slots allowed some light to shine through should their covers fail to retract. Instruments were revamped, as were some engine choices. Sales eased, but not greatly.

Camaro again paced the Indy "500" in '69, but Chevrolet cashed in this time by selling 3,475 "Pacesetter Value Package" convertibles at about $3,500 apiece. Of these, only four (perhaps more) were equipped like the three "real" pacers.

Keep reading to learn about the specifications of the 1967-1969 Chevrolet Camaro. 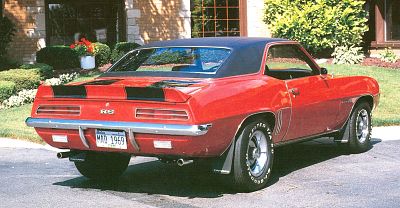 The Chevrolet Camaro would carry on in its signature form into 1970, being replaced by a completely new design at midyear.
©2007 Publications International, Ltd.

The 1967-1969 Chevrolet Camaro was thought to be a fierce competitor to the Ford Mustang, but the styling made it decisively different.