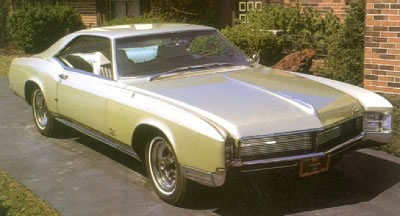 The Buick Riviera received only a mild cosmetic update for 1967. Most notable was a bold mid-height horizontal bar running across the grille.
2007 Publications International, Ltd.

Buick Riviera and Toronado interiors looked similar for 1966-1967. Both used drum-type speedometers, standard bench seats, and both had low, relatively flat floor tunnels. Thoughtful touches inside the 1966 Buick Riviera included door pulls molded into, and all the way along the plastic door panels. And the Buick Riviera's optional console was of the "natural bridge" type that had an open space beneath the front section.

Jerry L. Brochstein, a designer in Holls' studio (and more recently responsible for the Cadillac Voyagé concept car), conceived the 1966 Riviera's wheelcovers. Brochstein took his inspiration from Bugatti's straight-strung wire wheels. The Buick Riviera's wheelcovers were later picked up by Chevrolet and used on the 1967-1975 Corvette and Caprice: same vanes but different spinners. Motor Wheels' stamped-steel chrome rims were carried over from the previous generation as an option on all 1966 Buick Rivieras.

The 1966 Buick Riviera's design came together relatively easily, because everyone recognized the theme. The trick was to carry over cues from the 1963-1965 Buick Riviera -- the Ferrari/Rolls-Royce idea -- but repackage them to be compatible with the Toronado and its emerging E-body.

Buick Rivieras from 1966 through 1970 remained basically the same, but there were some important changes along the way. The 1967 Buick Riviera, while it looked virtually identical to the 1966 (save for a grille and taillight touch-up), used an entirely different engine. The 1966 Riviera had carried over the 425-cid V-8 from 1963-1965, an engine that unbeknownst to the public had reached the end of its road. Buick sorely needed a bigger, better V-8.

The Buick Riviera's 1966 425, especially with twin quads, had taken Buick's "nailhead" V-8 about as far as it could go. That engine had been introduced as a 322 in 1953 and had been reworked time and again. At 425 cubes, it had reached its absolute limit in size and volumetric efficiency. At a time when American cars were getting heavier by the year, when muscle reigned supreme, and when the old nailhead couldn't be pumped any higher, Flint decided to design and produce a brand-new family of Buick V-8s.

The second version, costing $300.96, added dual four-barrel carbs. Neither Gran Sport package included bucket seats. Those were a separate option, and unless one specifically ordered them the Gran Sport came with an armrest bench and column shifter, same as the regular Buick Rivieras.

Gran Sport officially became "GS" in 1967 -- enthusiast magazines had already been abbreviating it anyway. Equipment for the package in 1967-1968 was virtually the same as in 1966, except that the aluminum rocker covers were deleted.

The 1967 Buick Riviera's standard brakes remained 12-inch drums, the fronts again clad in aluminum but now with 90 fins instead of the 45 from 1966. Vented discs became available optionally for the first time in 1967 ($78.74), and the rear drums remained cast iron.