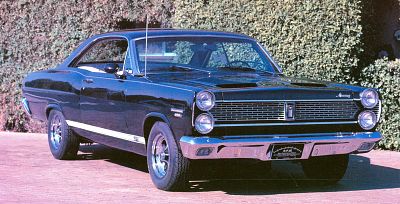 By 1967, the Comet name was officially used only on basic 202 sedans. This was not a good year for Cyclone sales -- or for that matter, any Comet-derived models. GT production dropped sharply, down to only 3,797 in all and a mere 378 ragtops. Even fewer ordinary Cyclones left the plant.

After a strong start, Mercury's performance mid-size seemed to be faltering, unable to catch hold like its Fairlane cousin. Service as Pace Car for the 1966 Indy 500 (with Benson Ford at the helm) and an award from Super Stock magazine as "performance car of the year" weren't helping at the showroom. Disappointed they had to be, but the folks at Mercury weren't ready to quit just yet, as the next generation of intermediates would demonstrate.

See detailed specifications for the 1966 and 1967 Mercury Cyclone GT on the next page.