The Corvair died a tragic death, kept in production only long enough to amortize the die expenses of the second generation (1965) redesign. But its spirit lived on as the model evolved into the 1965-1969 Chevrolet Corvair Corsa and Monza.

Contrary to myth, the Corvair was not scrubbed because of Ralph Nader's attacks. Chevrolet documents examined by several writers prove that the word had been passed to start development of a conventional front-engine, rear-drive car in 1964, before the new Corvairs hit the streets. This was likely prompted by the phenomenal success of the Mustang, introduced in the spring of that year, as it was well before Nader's book was published.

Nevertheless, the 1965 Corvair was a stunning automobile -- one of the few that look good from virtually any angle. "It is simply not possible to photograph this car from an angle that makes it look ugly," said one veteran automotive photographer. "I don't know any other mass-production car from its period that you could say that about."

A tribute to Bill Mitchell's brilliant staff at GM Styling, the new Corvair looked like the work of one of the leading Italian houses. It was nicely shaped, but not overdone, with just the right amount of trim.

It was new under the skin, too, with a turbocharged model, the Corsa, producing an unprecedented 180 horsepower, and a new non-turbo with 140 horsepower. Important too was its new rear suspension, a virtual copy of the Corvette Sting Ray's: upper and lower control arms, the uppers doubling as axle half-shafts, the lowers being unequal length non-parallel bars. These four arms controlled all lateral wheel motion. The sole difference from the Corvette was the use of coil springs, whereas the Corvette had a transverse leaf spring.

No longer was there any question about tricky handling on hard corners. The Corvair's handling was now virtually neutral, with mild final oversteer at very high speeds. Attention was also paid to the front suspension, which was tuned to complement the new rear design and to provide roll stiffness.

Read about Corsa and Monza performance characteristics on the next page.

Four-doors were hardtops rather than pillared sedans, but by 1966 their popularity was waning.
©2007 Publications International, Ltd.

Chevrolet came close to retaining "Monza Spyder" for the turbocharged Corsa, but switched at the last moment. The Corsa retained the handsome brushed aluminum dash and full complement of instruments of the Monza Spyder, though it could be had without the turbocharger: the 140 horsepower engine with its four carburetors was standard on Corsas.

The 180 gave the Corsa performance amounting almost to drag strip stuff for a six-cylinder car: 0-60 in 11 seconds, the standing-start quarter-mile in 18 seconds at 80 mph. Top speed was 115, given enough straightaway; yet gas mileage still averaged around 20 mpg.

Corsas could be identified at a glance from their brushed aluminum rear deck panel. A convertible and two-door hardtop were offered, and production was triple that of the previous Monza Spyders, though hardly anything to enthuse about given the Ford Mustang's stupendous half-million-plus.

The Monza continued to be Corvair's bread-and-butter model, available in four-door hardtop form as well as two-door coupe and convertible. Monzas were slugs with the 95 horsepower engine, reasonable with the 110, and exhilarating with the 140, though the latter was rather finicky and difficult to properly tune.

At the bottom of the line was the 500 series, a plain-trimmed coupe and sedan base -- priced at little more than $2,000, which seems incredible today. For that paltry sum, they delivered singular styling, good fuel economy, and decent performance. It was rare when a 500 or Monza cost more than $2,750.

But Mustang was the hot "ponycar" now, and the Corvair appealed only to what Lee Iacocca called "the enthusiasts, the real nuts." Volume exceeded 200,000 in 1965, mostly on the strength of the new styling; a year later it was down by more than half, and in 1967 the Corsa was dropped.

The following year saw the demise of the four-door hardtop and 140 horsepower engine, and the Corvair finished life with a three-model line comprised of two coupes and one convertible, all powered by a standard 95 horsepower (110 optional) engine increasingly stifled by emission controls.

The air pump fitted to the final 1969s was notorious for causing severe ping and carburetor flooding. As a consolation to 1969 buyers, Chevrolet offered a coupon entitling them to a discount on their next Chevrolet. Most of them didn't use it, because Chevrolet was no longer building a car that appealed to their technical interest and enthusiasm.

Check out specifications for the 1965-1969 Chevrolet Corvair Corsa and Monza on the next page. 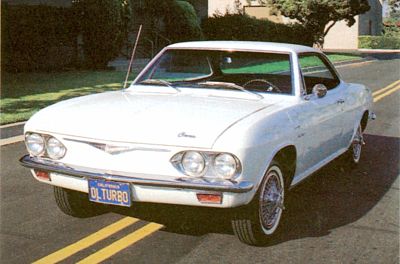