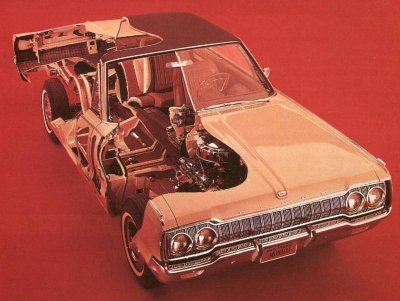 The new Monaco was chosen to serve as the basis for a full-scale cutaway designed to give auto show visitors a look at what went into the 1965 Dodges.

Where Dodge chose to spend its money in 1965 -- particularly where the 1965 Dodge Monaco was concerned -- was on interiors. "We reached the peak of sorts in our 1965 cars," explains former Chrysler planning executive Gene Weis. "Though a financial genius, Lynn Townsend admitted that he 'didn't know product' and consequently gave [product planning head] Bob Anderson a free rein in planning the 1965 line. We spent money on every aspect of our 1965 cars, adding content to best the competition, and targeting GM."

That certainly showed inside the 1965 Dodge Monaco. A unique three-spoke steering wheel fronted the expensive-looking padded instrument panel found in other big Dodges, with two impressively large circular gauge pods dead ahead and a full-width concave brushed-aluminum panel below.

Seating comprised buckets front and rear, available in three shades of pleated saddle-grain vinyl (red, black, and cordovan) or, optionally, with vinyl and "Dawson" cloth in blue or turquoise. The package tray was cleverly contoured to mate with the individual rear seat-backs, echoing the Thunderbird Sports Roadster of a few years before.

Like earlier Chrysler 300s, the 1965 Dodge Monaco came with a full-length center console. This provided a padded armrest/storage bin, concealed rear cigar lighter, ashtray ensemble and, where ordered, a tachometer up front. Transmission choices included the usual Torqueflite automatic or a four-speed manual, both with console shifters.

A genuine novelty was the use of rattan wicker accents on the Monaco's door and quarter panels, as well as over much of the backs of the vinyl front buckets (but not with cloth upholstery). Done in a natural light cream, the criss-cross wicker was unique and attractive. Above was a perforated vinyl headliner. And, of course, there was sparkling chrome everywhere, brightwork that literally lost its luster once the government began regulating the reflectivity of interior components a few years later.

The 1965 Dodge Monaco's standard engine was a revised version of Chrysler's workhorse 383-cid V-8 with 325 bhp. Buyers seeking more muscle could choose from two optional "wedgeheads": a revived 413 with 340 bhp, or the familiar 426 with 365 horses. All Monaco engines had four-barrel carburetors and thus demanded premium fuel.

A second cutaway look at the 1965 Dodge Monaco's engine and interior features.

Canadian Monacos offered more engine choices, starting with a standard 225-cid Slant Six, which must have labored mightily under the 3975-pound curb weight. Of the 2,068 Monacos built for 1965 in Chrysler's Windsor, Ontario, plant across the river from Detroit, a mere 40 had the six. There were other differences in Dominion Dodges. To reduce plant complexity, all Canadian-built seniors utilized Plymouth Fury interiors, including dashboards. Canadians also were offered a Monaco convertible that Americans weren't -- something that held true through the rest of the decade.

With all this effort put into the 1965 Dodge Monaco, how did it sell? Get answers to this question and more on the next page.