In late 1958, Chrysler styling chief Virgil Exner began groping toward the next "Forward Look": a new design theme to leapfrog the competition and bring profits rolling in like his 1957s had done. Exner's designs inadvertently led to the introduction of the 1962-1964 Dodge Standard.

Final styling models were ready by February 1960, and newly elected Chrysler president Bill Newberg blessed them for 1962. But he was soon forced to resign in a scandal, and "Tex" Colbert returned to power. Tex looked at the S-series and had second thoughts.

By year's end he'd not only ditched DeSoto, but the S-series Chrysler and Imperial as well (in favor of "definned" 1961s). But he couldn't stop the new Plymouth and Dodge.

The result was a sales disaster. Here were "standards" that not only looked like compacts but were almost as small: chopped six inches in wheelbase, up to seven inches in overall length, they lost hundreds of pounds of road-hugging weight.

No matter that interior room was hardly affected, or that performance and mileage benefited from the reduced poundage: Buyers wanted full-size cars to be full-size-and nothing less. Of course, there was a market for the "intermediate car." Indeed, Ford's newly shrunken Fairlane sold quite well in 1962.

Even the top-line Dodge Polara 500, available in coupe, hardtop sedan, and convertible, sold a total of only 12,268 copies.
©2007 Publications International, Ltd.

Keep reading to learn about the styling and sales success of the 1962-1964 Dodge Standard. 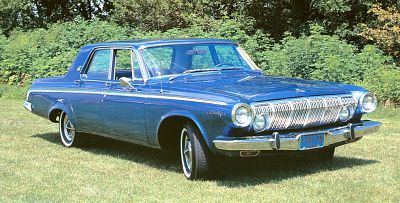 The 1962, 1963, 1964 Dodge Standard struggled for sales numbers. Plymouth, though, fell to eighth in 1962 model-year production, its lowest rank ever. Dodge managed to remain ninth despite building 39,000 fewer cars than it had in 1961, but would have fared worse had it not revived a true full-size model at midyear. Despite a short selling season, this 122-inch-wheelbase hybrid called Custom 880 accounted for over 17,000 sales.

Most 1962 Dodge standards were called Darts, after the division's successful full-size 1960-1961 junior line. These included base two- and four-door sedans and a four-door wagon, the same plus a hardtop coupe in midrange 330 trim, and a 440 four-door sedan, wagon, hardtop coupe and sedan, and convertible.

Topping the list were bucket-seat Polara 500 convertible, hardtop coupe and (later in the year) hardtop sedan. Darts could be ordered with a 225-cubic-inch Slant Six, or 318 and 361 V-8s; Polaras came with the 361. All models offered big 413 wedgehead V-8s with up to 420 mighty horsepower, courtesy of Ram Induction manifolding.

Funny they may have looked, but the lightest high-power Darts were soon taken very seriously on drag strips, where they trounced bigger, heavier rivals.

Dodge's standard-size cars took on some new model names to go along with their new styling for 1963.
©2007 Publications International, Ltd.

The 1963s put on some 45 pounds while growing three inches in wheelbase to 119 inches, thus matching full-size Chevrolets and Fords. Exner, in one of his last jobs at Chrysler (he left in 1962), applied square, Thunderbird-style rooflines to hardtops and a slightly less bizarre "face" to all models.

Dodge leapt to seventh in industry production as model-year volume soared some 194,000, though most of this came from the handsome new compact Dart.

Models and engines stood basically pat. Chrysler as a whole now climbed out of its early-1960s financial hole, and Dodge claimed sixth in production with over half a million cars -- almost twice its volume of just two model years earlier.

In all, these Dodges emerge as a classic case of sows' ears being made into profitable silk purses. And with yet another restyle, they would sell even better for 1965 under the revived Coronet badge, which testifies to their inherent design qualities. Too bad they still get such a bad rap, but that's what poor timing and oddball looks will do.

Keep reading to learn about the specifications of the 1962-1964 Dodge "Standard".

The 1962, 1963, 1964 Dodge Standard helped boost Dodge's sales and bring it to sixth in production with half a million cars.