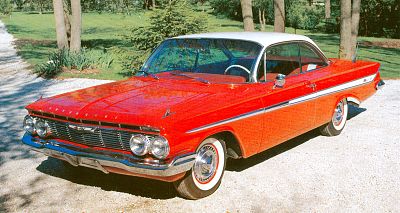 The Super Sport package included a 305-bhp 348 V-8 with either a four-speed manual or Powerglide automatic.
©2007 Publications International, Ltd.

The first 409-equipped Super Sports hit the showrooms in mid-1961. Most of the 453 examples built that year were Sport Coupes, with a handful of convertibles, though the package was theoretically offered on any Impala body. Only about 142 carried the big engine.

"Without trying hard," declared Motor Trend in its trial of the 409, "the SS will shoot away from practically anything else on the road." Testers achieved 0-60 times as quick as 7.0 seconds with a 4.56:1 axle. An ordinary Impala with 250-bhp 348 required more than 10 seconds.

More 409s became available for 1962; but curiously, the Super Sport turned into a $156 trim package offered with any Impala engine, even the 135-bhp six. However, SS body styles were strictly limited to the Sport Coupe (hardtop) and convertible. Styling grew cleaner yet, with a more squared-off profile and trailing body creaseline.

Motor Trend roared its 409 test car to 60 in 6.3 seconds, blasting through the quarter-mile in 14.9 seconds. A 380-bhp edition took an extra second to hit 60 in the hands of Car Life. Sales virtually doubled those of the rival Ford Galaxie 500XL.

Impala's body was boxier yet for 1963, as a 427-cid V-8 arrived, intended for professional drag racers. Most customers had to be content with a 425-bhp enhancement of the 409.

Styling was updated for 1964 with squarer corners.
©2007 Publications International, Ltd.

Super Sports were considered a distinct model in 1964. By this time, the SS owner could tune in to the Beatles on an AM/FM radio, and grasp a rarely seen twin-spoke walnut-grained steering wheel. "Any of three big 409 V-8's," said the 1964 catalog, "is especially saucy in highway passing situations." Impala fans couldn't agree more, and the Super Sport phenomenon was well underway.

For 1961-1964 Chevrolet Impala Super Sport specifications, go to the next page.