By 1961, production of the sporty Corvair Monza was in full swing and the car was selling like hotcakes. See more classic car pictures.
©2007 Publications International, Ltd.

It is often said that the 1960-1964 Chevrolet Corvair Monza started the sporty car boom in America. Many would argue that it began long before the Monza was even a gleam in Chevrolet's eye, giving the honor instead to early Corvettes, Thunderbirds, and Studebaker Hawks.

While certainly a valid argument, these were comparatively expensive vehicles, and the modern interpretation is that a "sporty car" leans toward the more affordable end of the price spectrum.

But whether a pioneer of the concept or simply a follower, it can be accurately said the Monza saved the Corvair -- and incidentally introduced the marketing ploy of sticking vinyl buckets and a floor-mounted shifter into a compact and calling it a sports car.

Ironically, the Monza is perhaps more noted for what it led to (the Mustang) than what it did for the Corvair. As it turned out, GM's unique rear-engine compact proved one of the corporation's major albatrosses; it was the subject of endless litigation, and played the lead villain in the book that launched Ralph Nader. (That book, Unsafe at Any Speed, conclusively proved that the inattentive should not drive early Corvairs.)

Though the 1960-1961 Corvairs could indeed be a bit tricky to handle, later models were much improved, and by 1965 the Corvair sported a superb suspension that made it one of the most imaginative, efficient, and progressive cars of the decade.

The first Monza arrived late in the 1960 model year as a "spring special" to shore up the Corvair's disappointing sales. Against the plug-ordinary Falcon and Rambler, and the unique-looking but technically mundane Plymouth Valiant, the Corvair was doing much poorer than expected.

Indeed, the Monza was barely on the market when GM Styling was hard at work on what would become the 1962 Chevy II, later the Chevy Nova -- a conventional compact that would, finally, outgun the Falcon. But then an unknown product planner got the idea of dolling up a Corvair coupe with a colorful vinyl interior, carpets, and other luxurious widgets, and Chevrolet dealers finally had something to cheer about.

Go to the next page to find out about the engineering and sales performance of the 1960-1964 Chevrolet Corvair Monza. 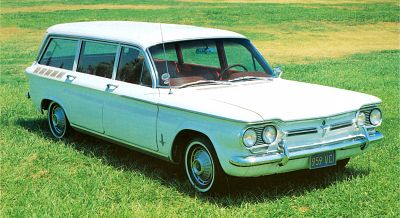 A Chevrolet Corvair Monza station wagon was introduced in 1962, but lasted only one year.
©2007 Publications International, Ltd.

There was nothing wrong with the coupe's styling: it looked European, not too unlike the little German NSU, but longer, more balanced. It lacked a conventional grille (stylists gave it a fake one in 1962), but it was pleasant enough otherwise.

Sales took off fast, and though there was only time to build about 12,000 Monzas for 1960, Chevrolet soared into volume production with the 1961s. When the dust settled, that model year had accounted for 110,000 Monza coupes plus another 34,000 of the new Monza four-door sedans -- more than all the cheaper Corvair models put together.

In 1962 they added a handsome convertible, and Monza sales went to over 200,000, which was the best ever. By the end of the first Corvair design generation in 1964, there were only two non-Monzas in the lineup, and the Monza was still racking up six-figure sales totals -- which was something, considering all the competition that had developed by then.

Largely the work of longtime Chevrolet engineer and later GM president Edward N. Cole, the Corvair was an enthusiast's car, radical and innovative. Its flat-six engine developed 80 or 95 bhp and was complicated: two cylinder heads, six separate cylinder barrels, and a divided crankcase.

Unfortunately, it weighed nearly 400 pounds, which was 100 pounds more than Cole had hoped. The initial suspension comprised wishbones and coil springs up front, semi-trailing swing axles at the back.

Enter the lawsuits, filed by people who wrecked their Corvairs mainly because they disregarded the manual's instructions and inflated the tires equally -- a potentially expensive mistake on Corvairs.

In 1962, an option of stiffer springs, shorter rear axle limit straps, and a front sway bar was made available; the 1964s were improved again when a transverse camber compensating spring was adopted.

Meanwhile, horsepower edged up to 110 and a decent four-speed gearbox was brought out as an option. There was even a Monza station wagon in 1962, but it wasn't in keeping with the sporty car's image, and only 2,362 were built before it was dropped.

Today it is the most desirable Monza next to the convertibles, which are far more numerous but offer unlimited head room. People who think Ralph Nader was right about the Corvair ought to try a 110 bhp four-speed 1964. Few cars of the era handle better, and fewer still offer more fun for the money.

For 1960-1964 Chevrolet Corvair Monza specifications, go to the next page.

A four-door sedan also joined the line in 1962, though this 1964 version was outsold even by the convertible that year.
©2007 Publications International, Ltd.