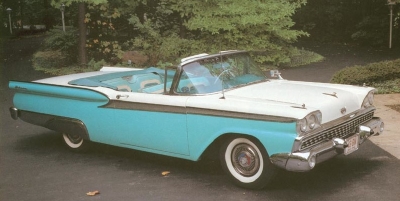 The 1959 Ford Galaxie was Ford's attempt to marry style with substance, attempting to sidestep the growing criticism in the 1950s that Detroit more often than not attempted to pass off the former as the latter.

To be sure, the decade produced more than its fair share of "all-new" cars that weren't, "major innovations" that really boiled down to superficial gimmicks, and styling sizzle masquerading as design steak. Yet it must be asked whether this was really so bad when we happily bought most everything the industry put before us. If we were sometimes duped, as the critics said, some of us were at least willing victims.

As the best-known practitioner of "design by opinion research," Ford Motor Company came in for much of this criticism, especially once the Edsel bombed. Yet the approach gave Ford at least as many successes, including the 1959 Ford Galaxie. The 1955 Ford and Mercury, the 1956 Lincoln, the 1957 Ford, and especially the four-seat 1958 Thunderbird came about as considered responses to what buyers said they wanted -- and who promptly put their money where their mouths were.

Ford would score even greater marketing triumphs in the 1960s (like the phenomenally successful Mustang, to name the biggest), but we shouldn't forget a popular 1959 development: the first Ford Galaxie. It came as a hasty effort to cash in on the success of the "Squarebird" hardtop, whose semi-formal wide-quarter roofline met with overwhelming acceptance.

Of course, it had been too late to change 1959 standard-Ford styling by the time buyers rendered their verdict on the Thunderbird, but company planners figured a similar roofline might boost the appeal of Fairlane 500 sedans and hardtops. It did.

As the final Ford in the design cycle began with the all-new 1957, the 1959 Ford Galaxie and other models received far more changes than most end-of-the-line evolutions, probably because Ford knew an all-new 1959 Chevrolet was coming. The previous 116-inch-wheelbase models moved over to the 118-inch Fairlane/Fairlane 500 span. New outer panels covered a much-changed 1957-1958 inner structure, resulting in bigger, brighter, blockier cars.

Ford rather immodestly hyped them as "The World's Most Beautifully Proportioned Cars." However dubious that claim, the 1959 Ford Galaxie and its brethren looked downright conservative next to the radical new "bat-fin" Chevrolet, but it went on to win a Gold Medal for exceptional styling at the 1959 Brussels World Fair.

It could have been otherwise. Some 1959 proposals were ugly, heavily sculptured affairs with enormous round tail lamps, reverse-slant rear windows à la 1957 Mercury Turnpike Cruiser and -- amazingly enough -- "batwing" tails, though more subdued than Chevrolet's. Fortunately, Ford had the good sense to reject those nightmares.

For more on how the 1959 Ford Galaxie helped Ford continue its Detroit dominance, go to the next page. 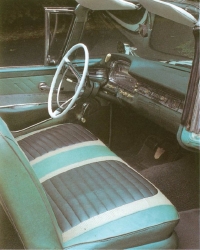 The award-winning styling of the 1959 Ford Galaxie looked conservative next to the batwing 1959 Chevrolet, but Ford sold nose to nose with Chevy that year.
©2007 Publications International, Ltd.