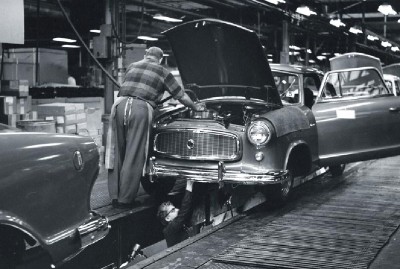 With the benefit of a full model year in 1959, assemblies of Rambler Americans tripled to 91,491 cars.
©2007 Publications International, Ltd.

The 1959 Rambler American series was expanded to include a couple of two-door station wagons. As the larger Rambler Six/Rebel and Ambassador wagons were offered only in four-door versions, management believed there'd be little sales cannibalization from the American. Like the sedan, the wagon was built from 1955 dies and received the same modernizing styling touches.

AMC claimed its new model "combines the outstanding economy and maneuverability of a small car with the family room and carrying capacity of a station wagon." With the rear seat folded flat, an American wagon could hold 52 cubic feet of cargo; with the tailgate lowered, a 90.3-inch-long load floor was available.

The Deluxe wagon was tagged at a mere $2,060, and the Super version, which included a standard cargo-area mat and roof rack, started at $2,145. By comparison, an Opel wagon cost around $2,400 and a Volvo PV 445 two-door wagon was $2,490! Even a new domestic rival in the compact field, the Studebaker Lark, charged $2,295 for its base two-door wagon.

The revival of the station wagon body also stirred up a return of the Deliveryman commercial wagon. Previously made in limited numbers from 1951 through 1955, it was essentially a three-passenger wagon with no rear seat and an extended cargo floor. The 1959 was the rarest yet: Just six were made, three with glass side panels and three in true sedan-delivery form with all-steel sides. After this, the Deliveryman disappeared for good.

The return of the wagon body in 1959 allowed Rambler to dabble in bringing back the Deliveryman utility wagon.
©2007 Publications International, Ltd.

Sedan prices were up by $46 from 1958 but still represented exceptional value. Standard equipment for 1959 was about the same as before, though Deluxe models gained the roll-down rear side windows. (All wagons featured sliding windows to provide ventilation for rear-seat passengers.)

This $2,145 1959 Rambler American Super wagon was the priciest American model for the year.
©2007 Publications International, Ltd.

Two surprising new options were a "Twin Grip" limited-slip rear axle and dealer-installed air conditioning. The availability of the latter boosted Rambler's popularity in southern states and was a sign of its growing popularity with more affluent buyers.

Rambler sales took off in 1959, helped perceptibly by the American. For the model year, production tripled to 91,491 cars as AMC struggled to keep up with demand. Of these, 32,639 -- almost 36 percent -- were station wagons.

See the next page to read about the 1960 Rambler American.