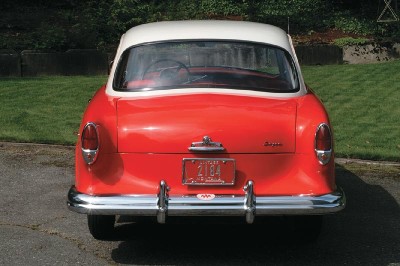 The 1955 Nash Rambler taillamps were retained for the 1958 Rambler American, but turned upside down.
©2007 Publications International, Ltd.

To demonstrate 1958 Rambler American performance, specifically its remarkable fuel economy, AMC engineers Carl Chakmakian and Les Viland drove an overdrive-equipped American from Los Angeles to Miami. Driving at an average speed of 40 mph and under National Association for Stock Car Auto Racing (NASCAR) supervision, the Rambler achieved 35.4 mpg -- better than many foreign cars. That was important because the American was being touted as an import alternative.

It had other advantages over imports. Buyers of foreign cars worried about obtaining parts and service. The American was built in the USA and backed by more than 2,300 Rambler dealers, so parts and service availability was far superior to the imports.

Mechanix Illustrated's Tom McCahill declared, "There isn't a better buy in the world today." He continued: "The Rambler American, with a minimum of chrome and nude of fins, without four headlights or built-in rattles, is an ideal-size small family car. It's as good-looking as any of the small imports I know and better-looking than most. It will give up to 30 miles on a gallon of gas (and more, with Overdrive) and will outperform any imported sedan selling for under $2,000 except in the cornering department. ... [T]he Rambler has titanic room for four, plus a good-size trunk. ... [It] is by far the most rattle-and-squeak-free 1958 Detroit product I've driven-and I've driven them all!"

After Popular Science compared an American to seven popular European cars it concluded, "[T]he Rambler American probably is the best buy, at the price, among the eight."

Shoppers apparently got the message. Production in the short 1958 model year came to 30,640 units, or slightly more than twice the projected break-even rate for the car. Of this more than half -- 15,949 cars -- were Deluxe models, including the 184 business sedans produced.

Despite adverse market conditions for the U.S. auto industry in 1958, AMC recorded its first profitable year. The corporation reported net profits of $26 million on wholesale sales to dealers of 189,807 Ramblers and Metropolitans versus a loss of $11.8 million on sales of 119,586 units the prior year. Rambler was the only domestic make to post an increase that year, and demand would continue to climb.

To read about the 1959 Rambler American, continue to the next page.