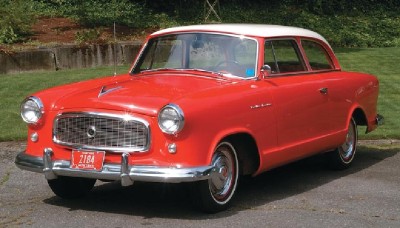 The flatter roof panel, open rear-wheel cutouts, and mesh grille of the 1958 Rambler American were updates from the 1955 Nash Rambler.
©2007 Publications International, Ltd.

Just two 1958 Rambler American models were offered for general sale. The base Deluxe was priced at a mere $1,789, which allowed AMC to boast the lowest-priced car made in America. (It undercut the austere two-door Studebaker Scotsman by just $6.) An American Super, with a few more "luxuries," was tagged at $1,874.

Meanwhile, the cheapest six-passenger 1958 Chevrolet and Ford both started at around $2,100. Fleet buyers were offered a three-passenger Deluxe business sedan -- sans rear seat -- for just $1,775, but that model wasn't mentioned in the regular brochures for the American.

Mechanically, the American was as simple and honest as Ford's legendary Model A. The only engine available was AMC's smooth-running 195.6-cubic-inch L-head six, a sturdy cast iron inline mill producing 90 horsepower and 150 pound-feet of torque, the latter at a low 1,600 rpm. A three-speed manual transmission with column shifter was standard.

Admittedly, the Rambler American Deluxe sedan was a bit stark inside and out. Its low price did include directional signals, a front ashtray, manual dome light, black rubber floor mats, and a choice of vinyl-and-fabric or all-vinyl upholstery. Frankly, though, bottom-line cars from the low-price brands were all pretty Spartan in that era.

Supers also sported stainless-steel windshield and belt moldings and rear-quarter windows that could be rolled down a few inches, all of which Deluxes lacked. Some folks who bought the Deluxe opted to pay a little more for a factory-installed package that included the armrests, right-side sun visor, and cigarette lighter. Those items could also be installed singly by the dealer.

The options list included a number of worthwhile items. Flash-O-Matic, a premium three-speed automatic transmission produced by Borg-Warner, was far superior to the two-speed automatics found on some other domestic cars and was very popular. Manual transmission with overdrive was also available.

To see how the 1958 Rambler American performed, continue to the next page.