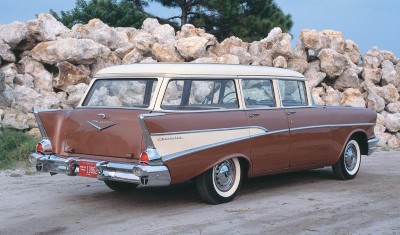 The 1957 Chevrolet Two-Ten Townsman was a best seller for the year.

As common as station wagons once were on the American scene, few of their names stand the test of time and memory, such as the 1957 Chevrolet Two-Ten Townsman. A rare exception is Chev­rolet's Nomad of 1955-1957, decked out in fancy trim and a rakish two-door roofline. Who, though, readily recalls the Handy­­man, the Beau­ville, or the Townsman -- all of them sold in the same showrooms as the Nomad?

David Ertel has done his part to raise the visibility of those forgotten nameplates. In 1977, at the tender age of 14, he purchased a 1957 Two-Ten Townsman from its original owner. Thirteen years later, David, of Englewood, Florida, embarked on a four-year off-frame restoration that resulted in the Antique Automobile Club of America award winner seen here.

In the 1955-1957 period, Townsman was Chevrolet's name for a four-door, six-passenger station wagon. (The nine-seat four-door was dubbed Beauville, and Handyman was the moniker for humble two-door, six-passenger wagons that weren't Nomads.) There was a Townsman in the top Bel Air series and in the mid-level Two-Ten lineup. The latter proved to be the most popular Chevy wagon of the year with 127,803 produced.

Though external sheetmetal and the instrument panel were completely new, the basic bodyshell and 115-inch-wheelbase chassis were little-changed from 1955. In appearance, interior decor of Two-Ten station wagons matched that of comparable sedans.

How­­ever, where the sedans had cloth-and-vinyl upholstery, wagon seats were swathed solely in vinyl. Color combinations for wagons were ivory and charcoal, two-tone green, or beige and copper. Ribbed linoleum covered the cargo floor.

The base price for a 1957 Two-Ten Towns­man was $2,456 -- with the standard six-cylinder engine and three-speed manual transmission. That total started increasing with the 283-cid V-8 engine and Power­glide two-speed automatic transmission found in Mr. Ertel's car.

With its two-barrel carburetor and 8.5:1 compres­sion ratio, this newly enlarged "small-block" mill made 185 bhp, but as much as 283 bhp was on tap with optional fuel injection. Power steering, an AM radio, and Sierra Gold and Adobe Beige paint are other extra-cost features that help make this Townsman memorable.