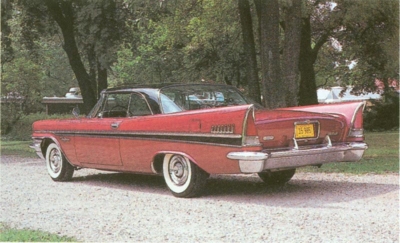 The 1957-1959 Chrysler New Yorker was the happy result of a major overhaul at Chrysler in the mid-1950s. Not content with its 1955-1956 sales comeback, Chrysler Corporation spent another $300 million to restyle and reengineer its entire line for 1957. The results were as unbelievable as they were unexpected. With these radically changed cars, Highland Park decisively wrested industry design leadership from General Motors and, in so doing, forever banished its staid image.

Though all the firm's 1957s looked good, the Chrysler New Yorker arguably wore this second-generation "Forward Look" best of all. From a clean, horizontal-bar grille to gracefully upswept rear fenders, it flaunted the sort of unified design that could only have come from one mind, not several. A wedge profile, dramatically lower beltline, vast new expanses of glass, and striking height reductions -- three inches on sedans, five on hardtops -- combined to suggest greater overall length, yet the 1957s were actually a bit shorter than the 1956s (on unchanged wheelbases).

In all, this "New Look of Motion" was distinctive and exciting, yet commendably restrained for the period. It made the 1957 Chrysler New Yorker exactly what Chrysler claimed: its "most glamorous car in a generation."

Its design goals called for improved handling with no penalty in ride comfort, and it succeeded admirably. Torsion-Aire made Chrysler Corporation cars, including the Chrysler New Yorker, America's most roadable 1957s, aided by a new box-rail chassis with wider tracks and a reduced center of gravity.

Highland Park's other technical triumph that year was TorqueFlite, a new three-speed automatic transmission offered throughout the corporate stable as an alternative to two-speed Powerflite. Standard for all 1957 Chryslers save Windsors, where it cost $220 extra, and also featuring pushbutton control, TorqueFlite received plaudits for its quick response and smooth shift action.

As another path to higher 1957 sales, Chrysler revived the Saratoga series, a sedan and two hardtops slotted between Windsor and New Yorker. All other offerings returned from 1956 save the New Yorker St. Regis and Windsor convertible and Nassau. Windsor moved up to the previous year's 354-cubic-inch hemi V-8, with 285 standard horsepower or 295 optional; the latter was included on Saratogas. Chrysler New Yorker, befitting its top-line status (not counting the year's equally new 300C) received an even larger 392 hemi packing 325 bhp.

To learn more about how the 1957-1959 Chrysler New Yorker benefited from Chrysler's new initiative, go to the next page.