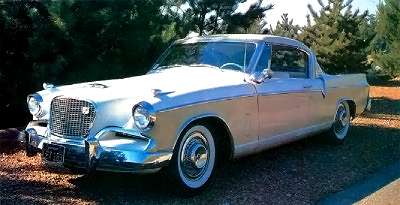 Few Golden Hawks were sold in 1956, despite a look that enthralls many collectors today.

The 1956 Studebaker Hawk had no fewer than four variations: Flight Hawk, Power Hawk, Sky Hawk, and Golden Hawk in ascending order of price, power, and plush. The lower-line Flight and Power Hawks employed the Starlight coupe body shell, and the upper-level Sky and Golden Hawks used the hardtop shell of the original Starliner.

As was by then becoming customary at Studebaker, numerous budget restrictions were imposed on the Hawk program. Though no one seems to remember the exact tooling costs, Bourke recalls that the restyle was carried out with very little money. The most obvious changes were in the hood, grille, and trunklid. Collectible Automobile asked him about his greatest disappointment in the 1956 design: "I wasn't pleased with the finalization of the decklid. I can only say that I just didn't particularly enjoy the shape of it, the way it kicked up in the back. It was overdone for what it was, and should have been cleaner in some ways."

There were other face-lift proposals, of course, but the one chosen was the one most obviously different from the 1955 look. The lower-line Flight and Power Hawks employed the pillared 1953-1955 Starlight coupe bodyshell, though some 500 pillarless Flight Hawks were also built, mainly for export sale. The upper-level Sky and Golden Hawks shared the pillar-less hardtop shell of the original Starliner.

Budget-minded buyers were attracted to the $1,986 Flight Hawk. Offered only with Studebaker's 101-horsepower 185.6-cubic-inch L-head six, it was fuel-efficient but underpowered, though some critics maintain it was the best handler in the flock because of its relatively light front end and lack of serious speed potential.

The Power Hawk was the least expensive V-8 version, carrying the firm's familiar 259.2-cubic-inch engine with 170 horsepower as used in the Commander series. Virtually identical in appearance with the Flight Hawk, it offered attractive looks and good V-8 go in the tighter pillared body, and was fine value at a list price of just over $2,100.

Next up the ladder was the Sky Hawk, acclaimed by many as the best-looking of the bunch and powered by the 289-cubic-inch enlargement of the Stude V-8 introduced for 1956. The Sky Hawk wasn't cluttered up with chrome, and lacked what Bourke terms "those damnable fiberglass fins." Actually, it looked a lot like the 1953-1954 Starliner.

According to Richard M. Langworth in Studebaker: The Postwar Years, initial planning for 1956 envisioned continuing the limited-production President Speedster from 1955, with the same name and appropriate styling changes, at the top of the revised two-door lineup. It was also slated to have the 320-cubic-inch V-8 and Ultramatic transmission from the Packard Clipper and, possibly, a torsion-bar front suspension.

What emerged was the Golden Hawk, a no less ambitious amalgamation of corporate components. It was easily distinguished from the lesser birds by small fiberglass fins artfully grafted on over the rear fender seams, plus bright wheel arch moldings, wide-ribbed alloy moldings above the rocker panels, and a stainless-steel roof band similar to that of the 1955 Speedster. Many Golden Hawks left the showroom with the attractive Regal wire wheel discs first used on the 1953s.

But what really set the Golden Hawk apart was what had been shoe-horned in under its low, sloping hood: Packard's big 352-cubic-inch V-8 with a full 275 horsepower. The company touted this as the most powerful car in the low-price field for 1956, and even compiled a chart comparing the Golden Hawk with 15 other high-performance models for sheer muscle.

Go to the next page to learn about the 1956 Studebaker Hawk models' performance. 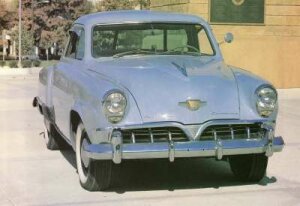