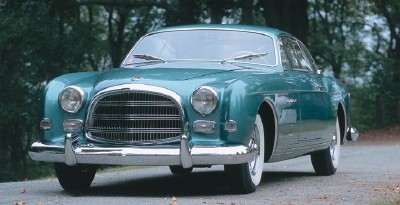 It's believed that only a dozen Thomas Specials and nine GS-1s were made, including this 1954 Chrysler GS-1 Special Coupe. See more pictures of Chrysler cars.

The 1954 Chrysler GS-1 Special Coupe was an inspiring design that broke free of the cold, hard realities of manufacturing capability and production economics. For all "practical" purposes, the GS Special was a Virgil Exner show-car design modified -- though not unrecognizably -- into a limited-edition grand tourer.

Soon after Exner joined Chrysler Corporation, he began a series of dream car designs, elements of which would eventually work their way onto production cars. These provocative specials were handcrafted in the Turin, Italy, shops of Carrozzeria Ghia.

Among them, the 1952 Chrysler Special featured bladelike fenders front and rear; round wheel openings; a low, light "greenhouse"; and headlamps that projected from either side of a trapezoidal grille.

A modified version of this Paris Auto Show car was built for C. B. Thomas, president of Chrysler's export operations, in 1953, and this so-called "Thomas Special" gave rise to thoughts of a limited-production car. The essential design would be retained, and Ghia would build the cars.

The GS Specials were built on a 125.5-inch-wheelbase New Yorker chassis. A Chrysler 331-cid "hemi-head" V-8 hooked to the new PowerFlite two-speed automatic transmission made up the powertrain.

The 1954 Chrysler parts bin was also tapped for items like bumpers, taillights, the steering wheel, and major gauges. Chrysler accessory wire wheels were used on the cars, which were sold exclusively in Europe by the corporation's French distributor.

A production run of 400 has often been cited for the GS-1. But John White, in whose Ramshead Automobile Collection the car shown here now resides, says new research suggests perhaps only a dozen Thomas Specials and nine GS-1s were ever actually made.

The car shown here came to America from France in the mid Eighties. It was eventually purchased by Michael Pomerance, who had it restored. White's collection in Sacramento, California, acquired the GS-1 in 2002. It was shown at the Peb­ble Beach Concours d'Elegance in 1995 and 2005.