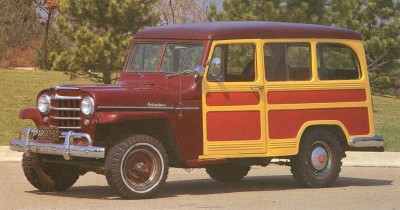 By 1955 the Station Wgon could be had with the 115-horsepower Kaiser six. The interior was quite Spartan, but this was, after all, a utility vehicle.
©Vince Manocchi

During 1955, Willys withdrew from the passenger car market and designated the wagon as part of the company's commercial line. Available in either 4 x 2 or 4 x 4 guise, it was designated the "Utility Wagon." The extra seat for the seventh passenger was deleted, as was the standard overdrive that had been featured with the four-cylinder models.

A live axle replaced Barney Roos's Planadyne suspension. Prices were moderated accordingly, and production figures were lumped with those of the trucks. Warn hubs were optional on the four-wheel-drive units, making it possible for drivers to disconnect the front-wheel-drive mechanism by simply turning the hubs with their fingers.

Performance, thanks to the 115-horse-power engine, was considerably enhanced, compared to the early Jeep wagons. A reviewer for Auto Age reported an easy cruising speed of 60 miles per hour in the two-wheel mode, with 80 miles per hour within easy reach. Then with the front wheels reconnected he "rode through a marsh, across a two-foot-deep stream and climbed a 60 degree bank on the other side....

"If it were possible to cover up some of the hair on the Willys chest and add some powder and paint and a bustle," Auto Age's chauvinistic staffer added, tongue-in-cheek, "maybe the style-conscious females who determine America's car market would give it more of a tumble."

Willys's trucks featured the same changes and updates as the wagon line. A 4 x 4 sedan delivery was added in 1953, priced $451 higher than the 4 x 2 version. The four-wheel-drive unit appeared to have had only a limited market, and usefulness was limited.

The six-cylinder, F-head Willys passenger car engine was made available to 4 x 2 sedan delivery buyers in 1954, and the 115 horsepower, 226 cid Kaiser L-head six became the standard powerplant for the 4 x 4 trucks, supplying both with badly needed additional power. Despite all this shuffling, the big news on the Jeep truck front was still a year away -- Forward Control. Keep reading to learn about the Kaiser-Jeep FC-150.