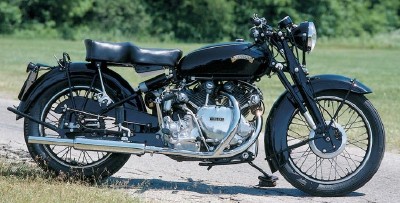 Britain's Vincent HRD series, like this 1951 HRD Series B Rapide, were in their time among the world's fastest motorcycles. See more motorcycle pictures.

The 1951 Vincent HRD Series B Rapide motorcycle was built with components bolted to each other rather than to a skeletal frame, giving it an odd look.

Britian's Vincent HRD series of motorcycles traced its origins to 1928. After purchasing the HRD company that year, Philip Vincent added the name to his own line of motorcycles.

As an inventor and engineer, Vincent produced some very innovative designs during his career, and bikes carrying the Vincent HRD logo were known for their quality construction -- and high prices. It was the latter that would lead to the company's demise in 1955.

Vincent's first models were powered by engines produced by the J.A.P. company , as were many other motorcycles of the era. But they sported rear suspensions -- unusual for the day.

In 1935, the company introduced its own engine, a 500-cc overhead-valve single. V-twins followed, essentially being two singles combined on a common crankcase.

The early V-twin, mounted in a motorcycle called the Series A 1000, gained the nickname "plumber's nightmare" due to its spaghetti-like web of external oil lines.

After World War II, the Series B Rapide appeared with a cleaner design. The new motor was a 50-degree V-twin that doubled as a structural frame member; gone were the front and rear downtubes of older models.

Postwar Vincents, therefore, looked a bit odd, as though all the individual components were bolted to each other rather than to a skeletal frame -- which, in essence, they were.

The bikes' "Girdraulic" front forks were also unusual in that they combined a girder design with a shock absorber.

Rear suspension was unique, too, as a triangulated swingarm compressed dual coil-over shocks mounted beneath the seat.

But most important to buyers was that Vincents were the fastest bikes of their day, though admittedly their 1000-cc engines were larger than those of most European competitors.

Continue to the next page to see more 1951 Vincent HRD Series B Rapide motorcycle pictures. 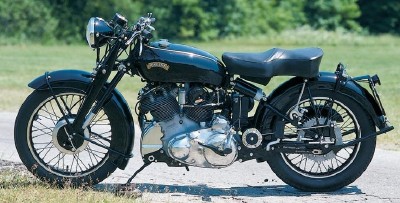 The 1951 Vincent HRD Series B Rapide motorcycle, like all Vincent HRDs, was known for quality construction and a high price.

The triangulated swingarm compressed twin shocks mounted below the saddle.
The unique rear taillight featured a "Stop" insignia.
The speedometer was situated above the handlebars, while other gauges were located within the top of the headlight.
Depicted on this postcard circa 1950 is Roland R. Free running a Vincent Black Shadow on Utah's Bonneville Salt Flats. His speed was 148-150 mph.