The 1951-1954 Chrysler Imperial was the match of any American car in terms of engineering and luxury, but suffered because of conservative upright styling. See more classic car pictures.
©2007 Publications International, Ltd.

The 1951-1954 Chrysler Imperial was the highest class of Chrysler, a car competing with the likes of Cadillac, Packard, and Lincoln. Imperials received the best material and componentry Chrysler had in the 1951-1954 period (Ausco-Lambert disc brakes, the biggest hemi V-8, and Fluid-Torque Drive or Powerflite transmission all standard) and naturally offered the best grades of upholstery. Like Cadillac and Lincoln, Chrysler Imperial never offered a station wagon.

Farther up the scale in extra-long-wheelbase territory resided the Crown Imperial -- also a Chrysler in these years, but built on a 145.5-inch wheelbase to rival the Cadillac Seventy-Five and, in 1953-1954, the Packard Executive sedan and Corporation limousine. Again, the Crown Imperial scored only a fraction of Cadillac's sales, and barely kept pace with Packard's. Its obvious image problem tells why Chrysler decided to run Imperial as a separate make for 1955.

Least common of the 1951-1954 Chrysler Imperials (and conversely most desirable today) was the convertible model, which saw only 650 sales in 1951, was dropped, and appeared only as a solitary prototype in 1954. Mounted on the longest standard wheelbase, it was quite similar to the New Yorker convertible except in price -- it cost $4,402, about $500 more. This moved it ahead of the former champion, Packard's Custom Eight Victoria, as the single most expensive non-limo production car on the American market. It also explains why so few found buyers.

For more on the 1951-1954 Chrysler Imperial and its variations, go to the next page. 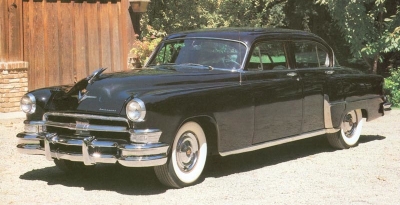