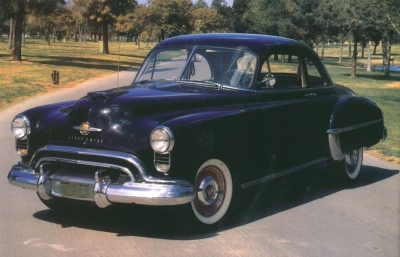 Styling on the 1950 Oldsmobile Series 76 was very similar to the 1949 model. See more classic car pictures.
none

Of course, most of the hoopla was lavished on that new V-8, the new styling, and on the new Holiday two-door hardtop in the 98 series.

The 257-cubic-inch six-cylinder engine was good for 105 horsepower.
none

­ For 1950, Oldsmobile held a steady course, giving its 76 and 88 series only a very light facelift. That meant little more than revised stone shields and side chrome on the rear fenders.

About the only visual differences between the 76 and the 88 was that the latter added a chrome spear on the front fenders and doors and wore a Rocket 88 badge on the decklid, while the former made do with plainer trim above the taillights.

Sales surged for most automakers in 1950, due in part to people buying as a hedge against the possibility that auto production would soon be curtailed or halted. The U.S. military had become involved in defending South Korea, which had been invaded by troops from the North.

A look inside the 1950 Oldsmobile Series 76 club coupe.
none

What then of the six-cylinder Series 76? Alas, output of Oldsmobile's lowest-priced cars skidded 65 percent to 33,257 units, this spread over 13 models.

The least expensive of them all was the two-door club coupe, which listed at a modest $1,719, some $311 more than the cheapest Chevrolet club (sport) coupe, or $221 more than Chevy's DeLuxe coupe, which would have been more comparable to the Olds in trim level.

Although the Olds 76 (and 88) shared the same basic bodies with Chevy, the Olds rode a 4.5-inch-longer 119.5-inch wheelbase, weighed 170 pounds more, and boasted a 13-horsepower advantage over Chevy's base "Stovebolt" six.

The Series 76 was on its way out after 1950, but its body style is still significant today.
none

Still, the 1950 Series 76 is significant because it was the last of the breed. The standard club coupe is a worthy keeper because it's rare and because it held down the bottom rung of the Olds ladder.

And the club coupe body style deserves special mention because of its short rear side windows and the resulting long rear deck, which gave it a distinctly sportier look than the regular two-door sedan.

The featured 1950 Series 76 club coupe is owned by Paul Cassity of North Hollywood, California. It has the three-on-the-tree stick shift and has been restored to as-good-as-new condition. Just crank up that Big Six, and see what 202 pounds-feet of stump-pulling torque at a low 1,400 rpm can do.